You are here: Home / Front Page News / Nadal Says He Did Request that Carlos Bernardes Not Umpire His Matches 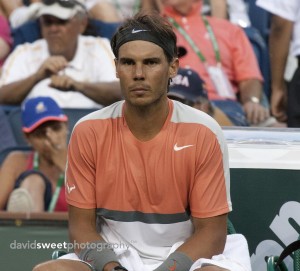 (May 26, 2015) Simon Briggs of the Telegraph reported last week that chair umpire Carlos Bernardes was “unlikely to officiate him (Rafael Nadal) at Roland Garros.” Nadal was upset with Bernardes’ officiating in Rio and had a disagreement.

Nadal addressed this in his post-match news conference on Tuesday.

Q.Can you tell me what happened with Bernardes? Is it true the situation he cannot umpire your matches, or do you know anything about it? Because I read it, but I have no exactly the clue what happened.

RAFAEL NADAL: Is easy, no? There is a lot of umpires on the tour. I respect a lot Bernardes. I consider him a great umpire and a good person, but I think when you have some troubles with the same umpire, sometimes it’s easy to stay for a while away, no? I think that’s the real thing. I think is better for both of us if we are not in court at the same time for a while after what happened in Rio de Janeiro. That’s it. No problem with him personally.
Q. But not your request?
RAFAEL NADAL: Yes, it was my request, and the ATP talking about — well, I asked if it’s possible, but nothing personal against him 100%. I respect him like umpire, I respect him like person, and I consider him a good person more than that. So for me is not — I am not happy with that situation. That’s the first thing. Because I would love to have Bernardes on the court again. Will happen, but, you know, I think for both of us it is better to have a break, you know. We had some problems. For me he hasn’t — he was not enough respectful with me in Rio de Janeiro . That was my feeling when I put my shorts the other way. He wants to put me warnings four times, that’s fine. But if I put my shorts other way and I ask him if I can change my shorts, I can put my shorts the right way, and his answer is, Yes, but you will receive a time warning. For me, that’s not fair, you know, (smiling.) When something like that, something like this did happen on court, that I think is not fair. I think is, you know, shows not respect, because I cannot play a full game with the shorts the other way. So it’s better. It’s better to be away for a while. That’s all. No personal problem with him, no? Seriously, I’m not saying that because I am in front of you. I respect him, I like him, but he was not right. And I believe that is for relationship and everything is better to be away for a bit.

In his news conference, Novak Djokovic was asked about umpires.

Q. Obviously players deal with the same umpires over and over again. You know them really well. Have you ever, in your entire career, felt the need or happen to ask for a certain umpire not to umpire your matches?
NOVAK DJOKOVIC: No.

Q. Is it common practice or is it normal for that to happen?
NOVAK DJOKOVIC: No, no, no. Honestly, I never thought of that. Chair umpires are humans, as well. We all make mistakes. Maybe periods of the year when a chair umpire is more or less confident to make certain calls and decisions, and of course, they need to be strongly participating in the match, as well. They need focus and attention, especially the surfaces where you don’t have marks like clay and have to make certain calls with, of course, a time limit that is now a new rule, puts a lot of pressure on them. So I understand it. Of course, you go through tense moments, emotions on the court, as a player and as a chair umpire. You make mistakes. There are some chair umpires in some matches that I remember that I wasn’t very happy with how they did their job, but I never thought of requesting a chair umpire not to ever or whatever, for a certain time, be a chair umpire in my matches. I don’t think that’s fair. I don’t think that’s fair to them. You know, they do their job as best as they can. Of course, sometimes they do it better or worse.