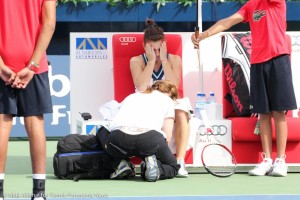 (May 27, 2015) Last year’s French Open finalist, No. 3 seed Simona Halep became biggest casualty of the tournament on Wednesday when she bowed out to the 70th ranked Mirjana Lucic-Baroni 7-5, 6-1 in the second round.

The 1999 Wimbledon semifinalist also knocked the Romanian out of last year’s U.S. Open.

“When I saw the draw and I saw who I was playing second round, I knew it was going to be really tough,“ said the Croatian. “I was going to have to play a great match again and back up sort of what I did at the US Open. Because, you know, sometimes people say, Oh, it’s one day everything went in, and I don’t look at it like that. I know I played really well. I have been working really hard, and I knew today I had to play some great tennis. I was ready for it. I have been feeling really good also in practices. Even though my results haven’t really been that great lately, I have been feeling great. I knew just it’s a matter of a moment coming, you know, winning few matches and results are gonna come. I’m glad I was able to do that again today.”
“I just tried to play really smart, really well and aggressive, not let her do what she likes to do,” Lucic-Baroni continued. “She moves the ball around really well. She’s an amazing athlete and super tough opponent. I was glad I was able to stay aggressive but not make too many unforced errors. That was the key for me.”
She played well. I couldn’t play my best today,” Halep said. “But, you know, she started to hit the ball very strong at the beginning of the match. So she was better than me today, and I have just to take, you know, this situation to handle it and just to go forward.”
Defending champion Maria Sharapova defeated Russian countrywoman Vitalia Diatchenko 6-3, 6-1. She’ll face 2010 Roland Garros finalist Samantha Stosur. Stosur destroyed French wild card Amandine Hesse 6-0, 6-1.

“Playing Maria is always a big challenge for me,” Stosur said. “No matter what surface it’s on, I don’t have a very good record at all. Obviously we played last year. That’s the last time we played against each other. So it’s always a big challenge, and I’ve got to be ready to have to play, you know, as well or maybe if not better than what I have been doing. So it’s one of those matches that’s a tough matchup, but I know I’ve got, you know, the game that can trouble here, and hopefully I can do it well and we will see what happens.”
“She’s always a tough opponent,” Sharapova said of Stosur. “She enjoys playing on clay, benefits a lot from this surface. Yeah, it will be a tough match. But, you know, I have a pretty good record against her. I enjoy our matches. I hope I can continue that.”

Stosur has a seven match win streak, winning the Strasbourg event on clay last week, her first title of the year.

Stosur credits her old coach David Taylor, who is back with her as of last month for her resurgence.

“I think going back with Dave, that’s given me confidence,” Stosur said. “That’s probably a contribution, and then playing on a surface that I feel good on. Been able to get over a couple of injuries again. It all I guess makes for a better kind of couple of weeks.”

Federer, who was approached by a fan on the court for a selfie in his last match, was happier with the on-court security on Wednesday.

“I think everybody is a little bit more alert,” he said. “That was the only wish I had. It’s just that the security is more alert. They don’t need to change anything that we need to have fences and all that stuff, not at all. Tennis is one of the most accessible sports out there, and we are unbelievably close with our fans. That’s what I love about it. So for me it was just more important that everybody was doing their job, taking it very seriously, wakes up and that they are standing in the right places and to keep an eye on what’s really important and not about just being there, you know. I think I felt that today. So now we have just got to all keep it up for years to come. I know it’s a lot of work, but it was a good exercise I think for everybody.”

American Steve Johnson has reached the third round. The world No. 56 defeated Sergiy Stakhovsky.

“He kind of came out and steamrolled me in the first set and early part of the second, but righted the ship a little bit. In the third I played a bad game to get broken back,” said the former NCAA champion. “I think it’s just a sign of maybe I’m maturing a little bit. Maybe in the past I would’ve lost my cool a little bit. I kind of stayed calm, won the breaker. In the fourth he started to serve much better. I didn’t have any looks. I think he made all kinds of first serves. I didn’t really have that many looks at seconds. So I was happy to have won that crazy last couple points in the breaker.”

“Actually, today I won because I had the crowd behind me,” Monfils said.

Nick Kyrgios, the 29th seed received a walkover into the third round as British qualifier Kyle Edmund withdrew with a stomach injury.