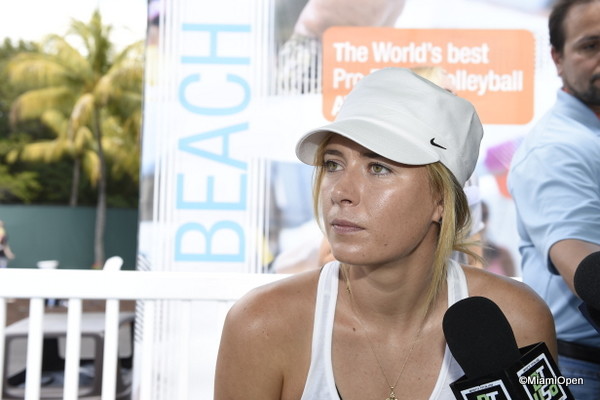 “I feel like I had small openings, and I just wasn’t able to play a good few points,” Sharapova said. “I just wasn’t able to keep that level up today. She was able to do that for a longer period of time. She was the much more aggressive player, took the time away from me, created her angles …….and I didn’t.

Sharapova said that her opponent was at a much higher level than she was and that it was a “tough day“ for the two-time champion.

The victory was one of the biggest of the Czech’s career. She also defeated world number twos Justine Henin in 2007 and Caroline Wozniacki in 2010.

“The last few times I played Maria we had really long battles,” Safarova said after the match. “I remember they were really close, and I almost beat her in Stuttgart, but I always lost. “Yesterday I was really pumped, and really ready, and I just wanted to take this match. I was just excited to be there.”

For Safarova, this will be her third major quarterfinal. She’ll take on No. 21 seed Garbine Muguruza, who defeated 28th seed Flavia Pennetta 6-3, 6-4.

No. 1 Serena Williams looked as though she was going to be another major upset victim when she fell behind American countrywoman Sloane Stephens 6-1.

Williams righted herself in the second set and stayed even with Stephens. From 4-5, Williams won seven of the next 9 games to take the second set 7-5 and build a 4-2 lead in the third set.

“I felt like if I had made a shot here or made a shot there, then maybe the first set could have been different,” Williams said. “But it’s not how you start, I guess it’s how you finish. That’s kind of how I’m looking at it.”

Williams has dropped sets to 3 of her 4 opponents this fort night. “I’m definitely gaining confidence,” Williams said in regard to the comebacks.

The 19-time major champion will face former French Open finalist No. 17 Sara Errani for a place in the semifinals.

In men’s play, Roger Federer completed a win over Gael Monfils in a match delayed by darkness on Sunday to move into his 11th quarterfinal at Roland Garros.

“I wanted to get off to a good start, because you never know how he will be playing,” said Federer. “So I felt good. I was calm yesterday. I was calm this morning.

Federer will face Swiss countryman Stan Wawrinka in the quarterfinals.

“It [will be] a special match,” said the 17-time major champion. “It is not a traditional match. There aren’t too many Swiss players in the draw… It’s always special to play each other. There will be a Swiss guy in the semi-final. That’s positive.”

After the match, Monfils said, “It was tough because I’m sick. I have not much energy.”

This sets up a highly anticipated Djokovic vs. Nadal quarterfinal on Wednesday.

“I’m not used to playing him that early, but that’s the reality and that’s a challenge that both of us have to accept,” Djokovic said.

“Probably the toughest quarterfinal in my career here in Roland Garros, without a doubt,” Nadal said.

“You can write what you want if it sells but this is not the match of the year. Matches of the year are finals, decisive matches.”
“Pressure is on both of us,” Djokovic said after the match. “People expect him (Nadal) to win always. Pressure is also part of what we do. You have to accept it.”

Nadal leads the head-to-head against Djokovic 23-20.

Andy Murray and David Ferrer will meet in the other top half of the draw quarterfinal. Murray defeated Jeremy Chardy ijn four sets, while David Ferrer beat Marin Cilic.