You are here: Home / Features / Federer Falls to Countryman Wawrinka at French Open 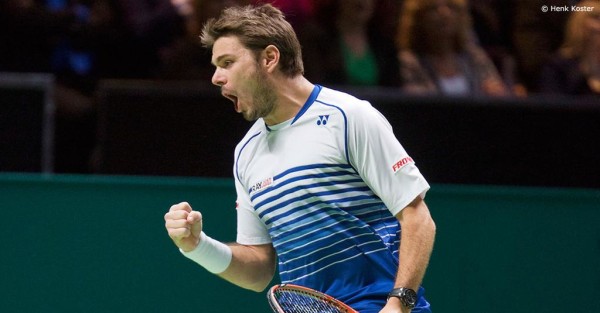 (June 2,2015) Stan Wawrinka defeated his Swiss countryman and No 2 seed Roger Federer for the first time at a major on Tuesday to reach his first French Open semifinal with a 6-4, 6-3, 7-6 (4) victory. This was only the third time in 199 matches between than that Wawrinka came out with the win.

This is the third straight year that Federer has been knocked out in the quarterfinals or earlier. Federer was unable to break his Davis Cup teammate’s serve.

“I know that when I play good tennis, when I play my best tennis, I can play so heavy from both sides that it’s really tough for the opponent to play,” said Wawrinka. “That’s why Roger was struggling today. It’s because I was playing so well.”

Wawrinka will play No. 14 Jo-Wilfried Tsonga next.

After the match, the Frenchman wrote on the red clay using his sneaker “Roland, je t’aime,” and got laid down on the court under the writing

This will be Tsonga’s second semifinal at Roland Garros, and his sixth at a major.

Earlier in the day, the first women’s semifinal was set up when 2008 French Open winner Ana Ivanovic and Lucie Safarova won their quarterfinal matches.

Ivanovic is back in the semifinals since winning the French Open seven year ago, beating Elina Svitolina 6-3, 6-2.

“I don’t know if I should feel very old or very happy,” said the seventh seed.