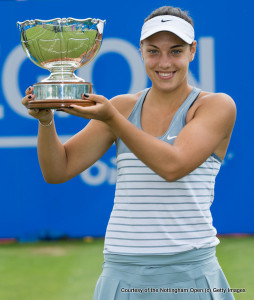 For the 17-year-old, former winner of junior titles at both the Australian and U.S. Opens, it was her third match in two days after playing both her quarterfinal and semifinal matches on Sunday.

Konjuh, who is the only under-18 player in women’s top 100, broke Niculescu’s serve four times in the final two sets at the Nottingham Tennis Centre.

“It means a lot, especially because it’s the first year here,” the world No. 87 Konjuh said. “It feels great, I didn’t expect it. I came here two days before to acclimatize on grass, and after five matches I’ve won the tournament, so it feels great.

“The first set wasn’t going my way but I had to stay calm. I just knew that my game was going to come and I did it much better in the second set. I’m really glad to get that win today.”

“She’s an uncomfortable player, especially on grass with that many slices,” Konjuh said of her opponent. “It’s so frustrating. She had that experience and took the first set because I wasn’t ready for it.”

“I had a perfect week and I hope to see everyone next year.

“I will remember it. It’s going to hold a special place in my heart, this tournament.”

World No. 61 Niculescu said: “Maybe I was not at my best in the final, I was a bit tired. She was serving and hitting the ball very hard. My return was not great, I was struggling a little bit. I’m happy to be here because I had so many tough three-set matches and came straight from Marseille in the heat and had to come to a new surface. But I’m really happy about this week and I’m really positive. My ranking will be better after this final hopefully. Life goes on.

“I don’t want to take away from her title because she played amazing.

“She played well, she deserved it. She’s a young, up and coming player. To have a title at 17, it’s amazing. I see her going very far in the rankings. This is just the beginning for her.”