(June 17, 2015) BIRMINGHAM, England – After the sunshine of the second day, the clouds, the rain and the drizzle brought a little bit of havoc to the draw on Wednesday.

After her battling win on Tuesday, Victoria Azarenka had to withdraw with a left foot injury, handing Zarina Diyas a walkover into the third round. It completed a pretty dismal day for the organisers as defending champion Ana Ivanovic was edged out in a deciding set tie-breaker against Michelle Larcher de Brito, 6-4, 3-6, 7-6 (6), despite serving for the match in the decider, and saving two match points.

Ivanovic said, after her match: “It’s tough playing someone who already had few matches on the grass. Today I started really bad until I found my rhythm and so on. Her ball was staying very, very low, so I struggled with it a little bit at times.

“I was really disappointed I couldn’t hold my serve in the third set. I think getting a win and moving on to the next one, it would be different game next match. But it’s always tough, that change.”

Swiftly following her out of the tournament was Victoria Azarenka, before she had even taken to the court, withdrawing from the final planned match of the day with a foot injury.

She said, in a statement: “It’s very disappointing for me to make this decision but I tried to practice and it just doesn’t feel 10-0 percent. I don’t think it’s the best time for me to take a risk right now, especially right before Wimbledon, and I need to make sure I have the best preparation possible.” 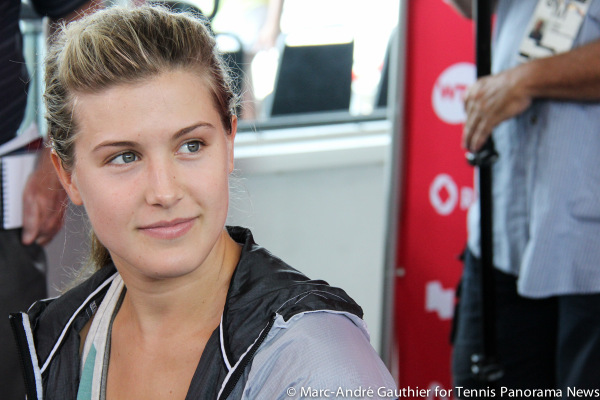 Eugenie Bouchard continued her troubling lack of form, despite a spirited attack after a rain delay, which helped her cause somewhat when it came to the second set, where she leveled the match. However, that relief was short-lived, after Kristina Mladenovic steamed through the final set without letting up a game 6-3, 4-6, 6-0.

“I think I played okay,” said the despondent Canadian. “A little bit up and down. I was trying to be more aggressive than I’ve been in the past, so I felt I did that okay in the first and second set. Then I don’t know what happened in the third.”

When asked how she would describe her mood overall: “Every negative adjective you could think of, I would use that. Just very, very frustrated.”

It was not all doom and gloom on a day disrupted with drizzles over day. 2007 champion Jelena Jankovic was not following Ivanovic on the train down to London, as she advanced to the third round, where she will meet Angelique Kerber.

We caught up with the German after her victory over Tsvetana Pironkova, as she assessed her performance so far this year after collecting titles in Charleston and Stuttgart.

“Of course I was a little bit disappointed after my third round loss in Paris, but clay was never my favourite surface, so in the end I think played a good clay season, and so overall I was happy.”

Kerber has a decent track record on the grass, and feels ready for the new season, saying: “I play very well the last few years. I reached the semis of Wimbledon, twice Eastbourne the finals, so it’s always nice to play on grass some tournaments, but of course the first matches on grass is always a little bit tricky but that’s why I’m here, to have a lot of matches before Wimbledon.”

Home hopes lay with British No. 2 Johanna Konta, as she carried on her strong momentum from reaching the Nottingham quarter-finals with another Top 100 win in the opening round against Jarmila Gajdosova, before starting well against sixth seed Karolina Pliskova. With the rain causing havoc to the schedule, it suited the Czech a little more, as she leveled the match, before the players came off once more.

As the clouds darkened, they came out once more in an attempt to finish, with Pliskova taking an early lead, but the heavens opened one more time with the Czech serving at 4-3 15/30.

Play will resume at 11am BST on Thursday.