You are here: Home / Contributors / Catching up with Jelena Jankovic 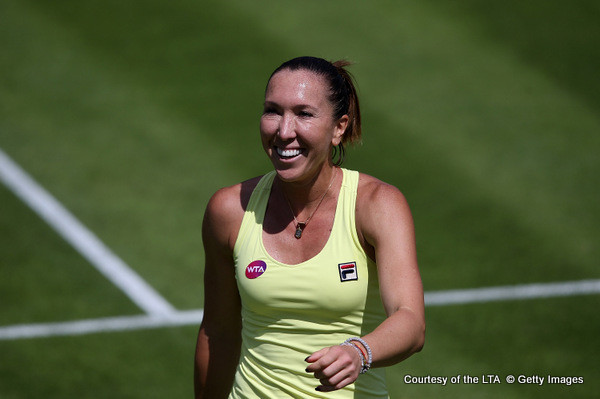 (June 20, 2015) BIRMINGHAM, England – It has been something of a turbulent year for the always-entertaining Serbian, Jelena Jankovic. She had laughed and joked her way to the Indian Wells final earlier this year, a venerable ‘old woman’ against the young 20-somethings that litter the top rankings, before injury crumbled her clay court season to dust.

Returning to a surface that has not always been her friend, despite providing her one and only Grand Slam title to date (Mixed doubles with Jamie Murray in 2007), she put together a run to the semi-finals of ‘s-Hertogenbosch before bowing out to fourth seed Angelique Kerber in the third round in Birmingham this week. Ironically that was also the year that she won the title in Birmingham (beating Maria Sharapova) and made the final of Den Bosch (losing to Anna Chakvetadze).

We caught up with her after her loss to Kerber, which seemingly hung on a pivotal point in the sixth game of the first set.

She said: “I was playing quite well in the first set, and you know I lost my focus a little bit. Kerber is quite solid. She does not give you any mistakes, she’s not going give you any gifts, so while I was being aggressive and hitting my shots, all of a sudden I got into a bad rhythm and I started making all these mistakes.”

In true Jankovic form, she proceeded to give an in-depth analysis complete with laughter and trying to demonstrate how frustrated she was at balls refusing to bounce.

She elaborated: “It was unbelievable, it was 3-2 and I had many break points and she’s a leftie and she kept serving that serve out wide and I would return at times a really good return and she would just kind of block it and the ball wouldn’t bounce, and I would have trouble reaching the next one.

“It was just unfortunate. She did really well you know, she came up with the good answers. I tried hitting down the line, cross court and somehow she would get those balls back and the ball wouldn’t really bounce for the next shot.

“I would run there and I would be at the ball and I couldn’t dig it out. And that game was quite crucial. If I went up a break, you know who knows what would happen. It would of course make a big difference.”

It is the first time Jankovic has put together a couple of tournaments in a row, and picked up some solid wins, opting to stay here in Birmingham as the field dwindled to practice, and can often be heard in peals of laughter from the players’ lounge, just across from the media centre.

She told us: “This is the first time that I’ve played two tournaments in a while and we’ll see. I know what I need to improve, the little segments, the little things that will make a big difference in my game.

“I asked for a wildcard [to Birmingham]. I was not supposed to play here, because in the previous years I only played Wimbledon, or barely one tournament if not. This year I decided to play a little bit more so that I would give myself a chance to play well at Wimbledon.

“You know I think played some really good matches, I played quite a lot of tennis for so long there has been sitting on the sidelines for maybe five/six months of the season. So you know, I have to take care of my body, I’m not at the stage where I can play really a lot, so I have to play, be smart do the rehabilitation, recover my body and then start fresh again.”

Since that decent run in 2007, Jankovic and grass have not necessarily been a good mix, but that has not deterred her from trying to conquer the slick surface this year.

She mused: “Actually I think I have pretty good shots to play on grass. I have a ball that’s quite flat, I move quite well, I can slice, I can drop-shot, I can play pretty good volleys, there’s no reason for me not to play decent on grass. Of course it’s not my favourite surface, because I like to construct my points and be a little smarter than just slapping the ball.

“It’s just that sometimes the ball digs in (laughs) I cannot get it up from the ground and yeah you have to have strong legs, a low centre of gravity. You’ve got to have strong quads to keep up with those shots. Not just today, day after day and that’s a big difference.”

Jankovic is currently ranked 29 in the world.