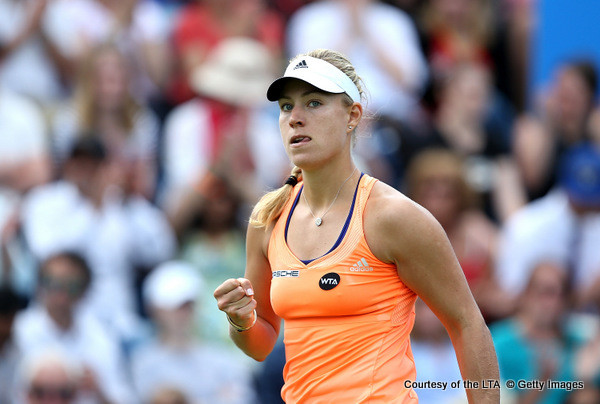 (June 20, 2015) BIRMINGHAM, England – It was touch and go what was the bigger adversary on Saturday – the opponents facing each other over the net, or the weather conditions that varied frustratingly from blue skies and the hint of sunshine, to thundering rain that sounded like wild applause within the confines of the media centre.

First up on a heavily disrupted schedule was Kristina Mladenovic and Karolina Pliskova, who had charmingly paired up to practice ahead of their match. Mladenovic admitted that the pair had known each other for years and enjoyed each other’s company off the courts.

It was Pliskova who was the more business like, breaking straight away, consolidating for a 3-1 lead before the first of the rain interruptions. Despite neither player being keen to try and play through a steady drizzle, it took a while before they were brought off for a spell.

Coming out for the restart, Pliskova wasted no time in breaking again swiftly, and served out the first set to love.

Mladenovic was net ready to give up without a fight though, lifting her level despite another extremely heavy downpour, which resulted in a few hardy souls being asked to vacate the stands for fear of on-coming thunder and lightning.

It was the Frenchwoman who took the early break this rime, only to relinquish it straight away. The pair stayed tight together through to the middle of the tie-break where she even built up three set-points but a run of five points on the bounce saw Pliskova seal a place in her fourth final this year 6-2, 7-6 (6), and her first grass court final.

In fact before this week she had struggled to even put together back to back wins on grass, despite having a solid game for the surface.

“I think my game is good on grass. I don’t know why I didn’t have any good results before this,” she said. “I’m happy it’s coming now. For me it’s really important to play like this, especially ahead of Wimbledon. Hopefully I can have some good results there as well now.”

“The conditions were hard, and Kristina was playing really well, so the second set wasn’t easy at all,” Pliskova continued. “I started the match feeling great, and as it went on it was getting worse, actually. She was starting to play better and better, too, so I couldn’t be happier to make it through in two sets.”

She is now a win away from breaking the Top 10, when she faces Angelique Kerber, who extended her head-to-head against Fed Cup teammate Sabine Lisicki to 6-0 with a straight sets win 6-3, 6-3, despite the crowd largely pulling for the 2011 champion.

Kerber is on her best run at Edgbaston, having made it to the third round twice, and while Pliskova is in her first Premier-level final, Kerber will be gunning for her fourth Premier title.

The pair are tied in their head-to-head 2-2, although Pliskova has won their two most recent meetings – Nurnberg 2014 and Sydney 2015.

She said: “Pliskova is also playing very well, very tough, deep, and strong. So I think it will be like maybe similar like today, the match tomorrow. But of course every single match start from zero and it’s another day, another match. She has a strong serve as well, so I must be ready to return it very well.”

Kerber and Pliskova are scheduled on the Ann Jones Centre Court, at 1pm.