You are here: Home / Features / After 17 Months Laura Robson Makes her Return to the Court 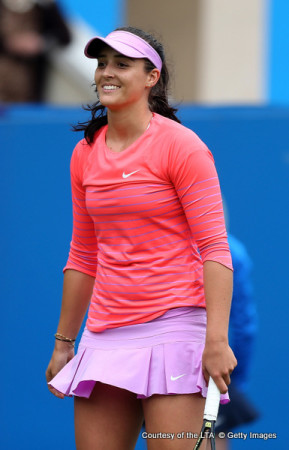 (June 20, 2015) Former British No. 1 Laura Robson returned to the court after a 17-month absence due to a wrist injury. The 21-year-old who received a wild card was demolished 6-0, 6-1 in less than an hour by Russian Daria Gavrilova in the qualifying tournament of the Aegon International in Eastbourne.

Robson who was at one time as high as No. 27 in the world was happy to be back on court.

“I’ve definitely felt worse, but also felt better, to be honest I think in a way it was a victory to just finish a match and be back on court, back playing tournaments and I’m very happy.”

As for being on the sidelines for so many months, Robson said: “Not easy, that’s for sure! It has been a lot of hard work, a lot of patience and I’ve had some great people helping me out the whole time in my coach and my team. I think as a team we’ve really worked through it together.”

“I think the hardest part for me was after I came out of my cast and I started to hit and I then had pain again, it was just such a downer, to have to go through that all over again. I don’t know if you’ve been following Del Potro, but he’s having the same issue. It’s a horrible, horrible feeling for anyone.”

“My coach made a joke, he was saying, ‘You know, so proud that you’ve played a match that you’re back in the tournament. Now there’s just one little thing that we need to work on…’ he just dead panned it and said, ‘everything’. I totally agree, the timing, the match rhythm, just hitting some back, reading shots that before I wouldn’t even think about but now I’m not sure where it’s going to land, so it’s a totally new start but a very exciting one.”

“I still went out there with the intention of winning, you never go out there just hoping to get through, but it was a lot closer than the score suggested, that’s the way I thought anyway, and I’ve come out, I know what I can do and I still have so much work to do.”

Robson, a former Wimbledon Junior champion, would love to play in her home country’s major.

Asked about what it would be like to to play Wimbledon this year she said: “I would be very excited I would have the next week to play more matches. I’ve noticed everyday I’ve been playing points and getting better and better and it will continue to do so. So I’ll have another week of practice and go out there with the best intention. I think it’s everything when you’re playing a match, it’s very different from playing points, and hopefully it will improve.”