You are here: Home / Contributors / Kvitova withdraws from Eastbourne as weather wreaks havoc 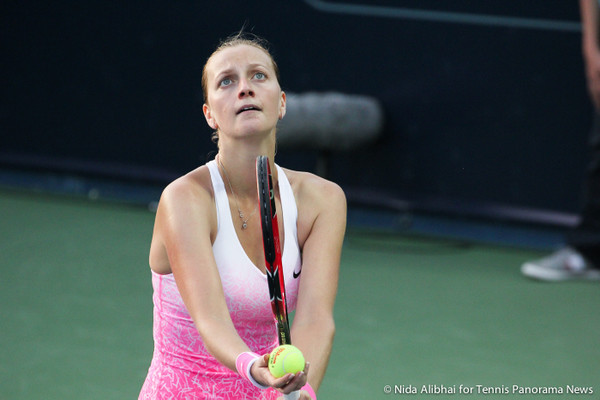 The Dane admitted that Kvitova had not felt 100% these past few days and she confirmed that she had felt unwell for a while.

Kvitova said: “I started to feel not well when I come here. Maybe from plane. I’m not really sure. I didn’t really feel the best. Like two days ago I really feel sore throat, and I was waiting what gonna happen. It’s not really much better. I didn’t need antibiotics so that’s a good sign. But I have to be in the bed and drink hot tea, I don’t know, just lying and resting.”

She confirmed that she would remain in Eastbourne for a few days before heading up to London.

“I know that a lot of players don’t play the tournament before. I’m not the only one. I practiced on it, and I still hope that I will have a few days in London, as well. I know I can play well on the grass. I have to still think positively, and I hope I gonna be ready for Wimbledon. I’m playing Tuesday, so it’s still time for it.”

It was a frustrating day for the players, being led into the media centre armed with an array of umbrellas as play continued to be put back until the afternoon, when finally the dark clouds cleared for a decent spell of play. There were hints of further disruption from time to time, with the doubles matches and a hefty chunk of singles being cancelled.

The day saw the return of the 2014 Australian Open finalist Dominika Cibulkova, returning after a four month absence, after being sidelined with an Achilles injury. She faced British wildcard Harriet Dart, who put up quite a fight in the second set as the pair traded five breaks of serve n the second set before the Slovakian edged ahead.

With defending champion Madison Keys being one of the matches bumped to Tuesday, it was left to Heather Watson to lift spirits of fans on Centre Court, as matches were chopped and changed around the courts after the torrential downpours of the afternoon.

Heather Watson brought the proceedings on Centre Court to a close with a win over Varvara Lepchenko, as there was barely a hint of the disruption that the schedule is in now.

After the match she said: “It definitely wasn’t easy. Varvara’s a great player, so I knew it was going to be tough today. I just had to hang in there. I think we both made quite a few more unforced errors than we would like. But I thought I just stayed tough. Thanks to the crowd for their support and for keeping me going.

“I absolutely love playing here on Centre Court. I love it here at Eastbourne. At times I was finding it quite hard with the sun. We had half the court in the sun and half in the shade, but I won’t use that as an excuse.”

She plays Elina Svitolina as the last match on Centre Court on Tuesday.