You are here: Home / Contributors / Eurovision and Food Poisoning – The World According to Andrea Petkovic 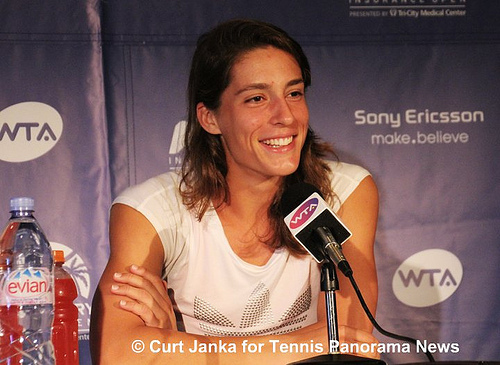 (June 24, 2015) EASTBOURNE, England – People often ask me why I prefer to follow the Women’s Tour. In fact just this week a colleague from Tennis Panorama wanted to know why I had missed Queen’s. I preferred to freeze my socks off in my old university city of Birmingham and watch the first of two weeks of Premier competition before Wimbledon.

Alas, I arrived too late to catch one of the more enduring characters of the tour Andrea Petkovic who lost to one of many of the strong Czechs who can really play on grass, losing to feisty teen Katerina Siniakova. However she redressed the balance in some style against another of the tour’s young stars Caroline Garcia.

“Well they play so flat and she played well. I didn’t play too bad, as I said I was a little insecure on the first match on grass. It’s not like on clay, I just need my time, and once we were in the tiebreaker I was ‘oh first match n grass, third set tiebreaker, what’s gonna happen?’ and it was over in a blink already.

“But well, you know now I played really well today so hopefully I can build on that.”

So exactly what is the issue with the stuff?

Petkovic explained her theories on the subject: “The thing with grass, I’ve figured now over the years, I think the first match that you play on grass is very determinate about your future on grass, and mine was kinda traumatic.

“So always in the beginning when I was still young and I wasn’t able to put things into perspective, I always told myself, ‘you’re bad on grass’ because one match that I played, I was bad on grass. Now that I’m a little older, I know that I’m not as natural on grass as I am on clay. The moment I step on clay I feel very comfortable, I know how to move, how to slide, because I grew up on it. It’s quite normal, right?

“And the moment I step on grass I feel a little off, I don’t know how to move and it takes me time. It’s not that I play bad on grass, it just takes me much more time than on other surfaces.”

With this being the first season where grass has now been extended to make the entire season five weeks long, it was curious to see that Petkovic’s grass tally throughout her career coming into this match was dead even at 11/11. She had a great run at ‘s-Hertogenbosch in 2010 but the two terrible years of almost career threatening injuries gave the German a new perspective.

She explained: “When you’re young and you’re going through normal youth, you don’t normally deal with stuff, right? Just I have to do homework, parents are annoying, parents are bothering you, they won’t let you go to a party, whatever.”

Petkovic came to tennis comparatively late, turning pro at 19 and she continued: “That’s the thing that you have to deal with and all of a sudden, as a tennis player You’re there, there are hundreds of people watching you, you feel the expectation of the media, you feel the pressure and all of a sudden you have to deal with pressure at such a young age and it takes a lot of energy.

Her injuries came right at the peak of her career. She had reached the Top 10 but the injuries started to rack up. She struggled with a right knee injury for the tail end of the 2011 season before the really bad luck hit, with a lower back injury that made her miss the Australian Open through to the spring hard court swing. On her return in Stuttgart, a home tournament that means a great deal to her, she injured her ankle, resulting in another four months off the tour, and another knee injury saw her miss the first two months of 2013 (including the Australian Open again). She rose from 177 in March of that year to finishing the year ranked No. 39.

She explains: “Obviously when you’re a little older, you’ve gone through stuff, you had sickness in the family, whatever, you know stuff you really have to deal with, not some stupid pressure because you care about what people think. And I think changes us older players and players who’ve gone through injury and for me I was quite unlucky where I was out for two years almost on the height of my career when I was Top 10, and I was playing really well. And then I came back and all these new young players were there now and I had to deal with double the competition all of the sudden after being absent for two years.

“I hope, but you never know, there is one loss and you still go depressive on yourself and watch sad French movies and cry yourself to sleep (laughs).”

For a player that loves the clay (and not in the sense of using it to make unpopular relatives ashtrays as gifts), it was a crying shame this year that her clay court season was marred once more with injury and then food poisoning.

She can laugh about it now but the effects knocked her out of the two Premier Mandatory events in the run up to Roland Garros.

“For me was kind of a tough thing that my clay court went sort of to the dumpster because of my food poisoning and my hamstring. I was sitting at the doctors and I couldn’t sit, I was falling down like this [falls from side to side]. I was like ‘ok you know when you feel bad you’re like in one day, two days it will be over. And I was [thinking] that I have to pull out of Madrid but I will be fine for Rome. It didn’t get better and that was the worst thing, In the end I took antibiotics and it went gradually better.”

However, it did not stop her from taking to Twitter during the Eurovision Song Contest this year. For those that have no idea why once a year a large proportion of (admittedly) European players and a fair few tennis writers go a bit mental for a week, there is an annual song competition between a bunch of competing countries in Europe, and a few oddities including Australia this year to celebrate 60 years of the competition.

On the night, Petkovic ruled Twitter with a steady stream of hilarious commentary, and while we both admitted to each other that once it used to be our guilty pleasure, we had fun talking theories and whether or not this year was a classic.

She surmised: “Not so classic year and I will tell you why. I have a theory and I think my theory, it’s not scientifically proven but it should be.

“Every year the winner song gets copied in the year after, and the problem with last year’s (that’s why Conchita won, because she was special obviously on one hand) but on the other hand, because she had a ballad and everybody else was doing this europop dance thing, because the year before Sweden had won with Euphoria. So this year everybody went for the ballad thing and so it was kind of boring.

“And so next year it will be really good because everyone will do some kind of Heroes, there will be a lot of hot guys, so I am expecting a huge Eurovision for 2016” she said, laughing out loud.

It has always been an amusing mystery why the tennis community is so bound up in this annual madness, but Petkovic had a theory on that too.

“I think one factor is definitely that it’s during Rome/Paris clay thing where you’re in Europe so it’s always in the evening, it’s quite late and you’re probably already back from dinner. I mean I plan my day according to the Eurovision but you can’t expect that from everybody (laughing).

“Most of the players they play a lot and so they have to rest their souls and can rest your soul the best by watching Eurovision Song Contest. I really don’t know (laughing) but it’s amazing.

“I always [used to] watch with my sister and now when my sister is not with me, I have twitter. I would like to see a statistic to see how many people unfollow me during Eurovision – so many probably (more laughter).”

Petkovic is nothing if not genial, engaging and there is a reason why she is one of the most popular players amongst fans. And despite her determinate first steps on grass those many years ago, she has just advanced to the Eastbourne quarter-finals, for the first time, where she will face Caroline Wozniacki.