You are here: Home / Contributors / Bouchard Retires from Eastbourne Match with Injury, Says will Play Wimbledon 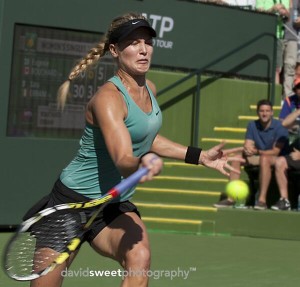 (June 24, 2015) EASTBOURNE, England – Genie Bouchard’s trials and tribulations continued when she looked out of sorts at the hand of Swiss teen Belinda Bencic. The youngest player in the draw went toe-to-toe with Bouchard before getting a decisive break and comfortably consolidating it by serving out the set at 6-4.

That momentum stayed with her as she leapt out to a 3-0 lead at the start of the second set, before Bouchard called out the trainer and subsequently retired.

The Canadian explained: “During the first set, you know, I was serving at a much slower pace than even just yesterday, and I kept trying and trying. I mean, at the end it was hard for me to put a serve in just because I felt that pain a little bit. I thought it would be better to stop.

“I’m going to play [Wimbledon] no matter what, even if I’m on one leg (smiling). I will take a few days off from serving and give it a little break and see how it goes.”

There has, of course, been intense media scrutiny around Bouchard since her run to her maiden Grand Slam final, but by her own admission she has felt lost on court. Even despite bringing on a new coaching team (and allowing for the fact that results are not going to be immediate), it has been frustrating for the Canadian.

She said: “I think something I realised maybe around Paris was that I think I was just thinking too much on the court. Tennis, you have to react so quickly and you don’t have time to think.

“So for me, I was thinking about where I was going to hit, how I was going to hit. It just slowed me down so much, and I was hesitating. And my game is so instinctive and just naturally reacting without thinking and playing that that really kind of slowed me up a little bit. I feel like that was a part of it, where I’m now just trying to go out on the court and tell myself, Just don’t think.”

After a flat end to the first match, the crowd were ready for a show, and Johanna Konta proved to be the one to provide it, as she faced Garbine Muguruza in her continuing fine form at Eastbourne.

She started solidly against the Spaniard, and when the WTA Rising Star started to pick up the pace, Konta found the resolve to hang on, not to panic having been broken serving for the match, and closed out a great victory.

In press this week she has been measured, refusing to get caught up in the gathering sense of euphoria in the media centre, but for the first time, we saw Konta light up the press room with her smile as the emotion of another solid Top 100 win with her parents on hand to witness it settled in.

That being said, she was still pragmatic when it came to assessing that final set. Konta said: “To be honest, you know, she played a pretty tough last three games. It wasn’t easy for me to finish it. I felt that I handled each situation to the best of my ability, and I’m just happy that there was some reward to show for that.

She earns a quarter-final match-up with Bencic, but sadly there was to be no double British triumph as Heather Watson bowed out to an in-form Sloane Stephens.

Watson said: “I wasn’t happy with my performance today. I just felt that I never got going at all. I felt quite slow to the ball and slow reacting and just slow with my mind.

“I still felt I had chances to get in the match. I had a lot of games, especially on my serve, where I was up and I had points to close the game and I just let it slip away. Sloane was very solid. She played great. She didn’t allow me to get back in, and I felt from the first ball she was pushing me on the back foot.”

The quarter-finals will start on Thursday at 11am BST.