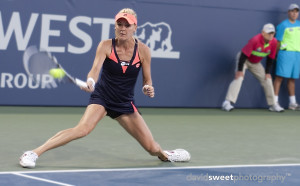 (June 26, 2015) EASTBOURNE, England – On the day when the Wimbledon draws came out, there was still the small matter of the Eastbourne finals to be set, with some great grass court action on the menu.

First up was Agnieszka Radwanska, who lifted the trophy in 2008 in a pretty tough final against Nadia Petrova including a mammoth tiebreak for a 6-4 6-7(11) 6-4 win.

She might not have had quite the same battle to book her place in the final this time, as she faced Sloane Stephens in the semi-final and countering the American’s attacking play, as she was put under almost immediate pressure from the first game, saving four break-points there and six in her next game before even the first sit-down.

That did not stop her from making the first strike against Stephens, as she broke the American twice to wrap up the first set.

Stephens picked up the pace though, as the pair settled in to some perhaps tricky conditions. Despite the sun shining down on Eastbourne, there was a stiff breeze in the air. A competitive second set was forced to a tie-break, and Stephens ripped some impressive winners past Radwanska to level the match.

Radwanska started off the brighter in the decider, breaking Stephens, despite having to deal with a dive-bombing seagull, and took more risks in the swirling wind with an array of drop-shots and crafted returns, driving out a 6-1 6-7(3) 6-2 win.

“So it was really tricky. You just had to know that the wind is going from each side and just to hit the ball strong, because otherwise it’s gonna fly wherever it will fly.”

But while the scene was set for a great match up between Swiss teen Belinda Bencic and Caroline Wozniacki, another former champion at the event. But from the start, Wozniacki looked ill at ease striking wild, missing volleys and after surrendering two breaks of serve before the first changeover, the doctor was called. As the conversation drew on and still no sign of a physical assessment, it was clear we were heading for a second withdrawal of the day. Earlier, Ekaterina Makarova withdrew from the second doubles semi-final with an Achilles injury.

Bencic said: “Definitely it’s not the way I wanted to win, of course. I’m also a little bit disappointed we couldn’t play a proper final because of course all the people and everyone.

“I didn’t know anything [about Wozniacki] before the match. Of course I also fell down a little bit yesterday, so I was more thinking of myself in that moment, so I didn’t notice anything what she had.”

Wozniacki confirmed that she had withdrawn with a back injury that had been troubling her for a few days, but had stiffened up considerably ahead of her match.

“I have had a slight back problem the whole week, basically. Today it stiffened up more, and I felt like I couldn’t move the way I wanted to and felt pain. I felt really bad for the crowd and everyone who had come out, but there’s nothing really I could do about it. It’s all about for me now just to look ahead for Wimbledon that’s starting in a few days. You know, just get as much treatment as possible and be ready for my first round there.”

Radwanska will face Bencic for the first time on Saturday. She surmised: “It’s always very interesting to play someone for the first time, especially not really happen very often. It’s gonna be interesting match, for sure. She had a really good season this year. Upcoming player on tour. So I’m really looking forward. Of course I think more pressure is on my side, but this is the final so we both want to win.”

Radwanska and Bencic will play the final on Saturday.