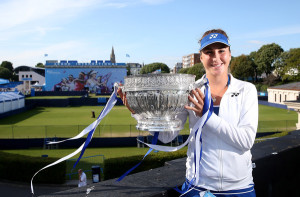 (June 27, 2015) EASTBOURNE, England – On a bright and breezy day, it seemed fitting the moment could go to one of the WTA Rising Stars, as Belinda Bencic rode the winds of Eastbourne to claim her first WTA Singles title.

At first glance it looked as through former champion Agnieszka Radwanska would have all the momentum on her side. She was rounding out nicely to form, save for a worrying fade away in the Nottingham semi-final a couple of weeks ago, and she had pretty much coasted through the draw until the semi-final where she had to fight against a determined Sloane Stephens and dropped her first set of the tournament.

By contrast, even though players never like to admit they even cast an eye over the draw, Bencic had no idea she would be contesting the final when she first looked her draw.

She said, after advancing to the final after Caroline Wozniacki’s withdrawal: “I actually saw the draw and I saw like Barthel first round, which is not easy. Then Madison Keys second round. I was like, okay.”

The final was a nervy affair for the first two sets, with three exchanged breaks of serve towards the end of the first, Bencic having the advantage to edge the Pole for a one set lead.

Radwanska had spent a lot of the latter part of the first set exasperated that things were not going her way, and where she needed to be fare more inventive, she was so, stepping up the aggression for an early break. Even when a sloppy game allowed the Swiss teen back, Radwanska looked to be just slightly sharper, going for her shots more and breaking with conviction to level the match.

But grass is nothing if not terribly unforgiving, and Bencic did not panic, breaking the Pole twice before the first change of ends, as well as holding on to her serves with confidence that belies her young years.

We wondered what nerves might prevail as she stepped up to serve out for her first title. None, as it happened – serving it out to love, and more than making up for the straight sets loss to Camila Giorgi just a couple of weeks ago at ‘s-Hertogenbosch.

Not only that but this makes her a pretty useful prospect on grass, much like a couple of other famous Swiss players we could think of.

It was an emotional Radwanska who carried out her on-court interview after the 6-4, 4-6, 6-0 loss. In a somewhat turbulent year, Radwanska has suffered the embarrassment of her appointment of Martina Navratilova as a coach folding after barely a few months. The results have been average and Radwanska found herself slipping out of the Top 10 as the general hubbub around the latest crop of WTA Rising Stars has encroached on the old guard’s limelight.

She said: “I think I had a lot of good matches, Nottingham and here. I think that’s the main thing. I think I did the best preparation before Wimbledon, and I really played good tennis.”

With Radwanska in Petra Kvitova’s section of the door she can expect a Tuesday start.

Meanwhile there was just pure unadulterated joy in Bencic as she followed in Madison Keys’ footsteps last year and lifted her maiden tour title.

She described those final moments with a maturity that marks her out as one to watch at SW 19, saying: “I was very focused and really I played very free. Of course I was disappointed I didn’t close out the second set. I was also starting to get tired. It was a lot of running and, yeah, long rallies. But then I started very focused. I did the 3‑0, so after that I relaxed a little bit and could close it out very good. I think I will just realise maybe when going to bed or maybe tomorrow.”

She will start against Tsvetana Pironkova when Wimbledon begins on Monday 29 June.