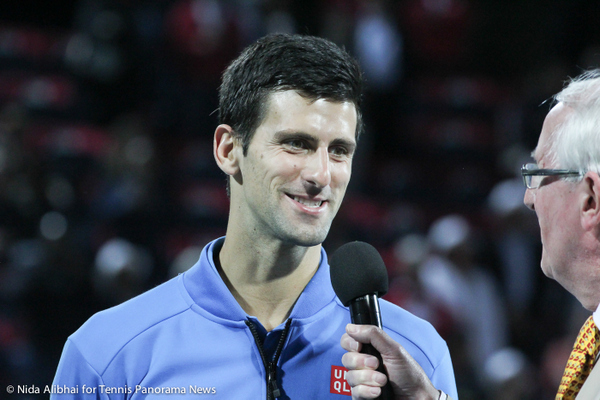 (June 28, 2015) Saturday and Sunday some of Wimbledon’s top seeds held court with the media, here is a look at some of the notable quotables:

“Yes, it was. Not just Roland Garros, but all the five months of the year have been really intense for me.  I played a big amount of matches.  Before Roland Garros, I’ve lost only two.  I had one of the best season starts in my career.  Of course, Roland Garros finals wasn’t easy.

“All in all, it was another great tournament.  But I needed some time to just mentally recover, rest ‑ more than physical rest, I needed that emotional, mental rest to recharge my batteries and get myself in a proper state of mind so I can start all over again.”

“I mean, right after I lost the match, of course, there was this sense of disappointment. There is no doubt about it.  I felt that for, you know, some days after it.

“Because I have a family, I have different things in life, different interest, I’ve managed to move on because of the experience that I talked about previously of learning how to handle these particular situations and circumstances. I managed to get the necessary reset in my mind.”

Djokovic says that coaching from the player’s box is fairly common:

“But also there are times when, you know, the team of the player communicates with the player when he gets to go and take the towel in the corner, which is closer to the box, or, you know, different ways.

He was also asked about his communication with his coach Boris Becker. Earlier in the day Becker was on radio saying that he has ways of telling Djokovic whether what he is doing is good or bad.

“It’s not necessary that, you know, he tells me where to serve or to which side of the opponent’s court I have to play, because that doesn’t happen.  But it’s more of a, you know, encouragement, and more of a support and reassurance, as I said, that’s basically present in those moments.”

In what seemed to be the most awkward questions of the weekend, defending champion Petra Kvitova was asked about wearing white on court while menstruating.

Q. Heather Watson was applauded earlier this year for breaking taboo and talking about what was phrased as girly things.  How much do you think that affects other females’ players game?

PETRA KVITOVA:  To be honest, I think it’s quite tough.  Of course, I have these experiences from before.  It’s never really easy to deal with one more tough thing.  I think always the beginning of this kind of period, it’s tough.  I think that for normal woman, they know about.  If we have to play the match or training or something, it’s difficult.

It’s one more extra thing for us.

Q. Does having to wear white as well…

Roger Federer on Serena Williams’ playing at such a high level:

“I’m not surprised.  I just think she’s a great talent.  She’s worked also very hard.  I think to be mentally ready for the challenge when she wants to be up for it, I think that’s what’s so admirable about her.

“Also Venus, I must say.  We don’t talk about Venus that often because Serena has been so dominant.  Actually that they’re both still playing is more of a surprise to me.

“But that they are playing, it doesn’t surprise me they’re actually playing well.  It goes hand‑in‑hand.

“I wouldn’t imagine them still playing and playing poorly.  Let’s put it that way.  They’re too good for that.”

Serena Williams was asked about coming into Wimbledon holding the first two majors, make her preparation different or make her feel any different.

“Personally, uhm, it doesn’t make it feel any different, which I think is a good thing ’cause I don’t feel any pressure to win all four.  I’ve been saying that, but I really don’t feel that pressure.  Maybe if I would happen to win here, then maybe I might start feeling it after that.

“Ultimately, I’m taking it one day at a time and I’m not thinking that far.”

Serena is very motivated this year:

“I think the fact that I lost so early the past couple years definitely makes me motivated.  But I think that also gives me a little less pressure because I haven’t done well here in the past two years.  It makes me feel like, Okay, I’ll be fine.  I have nothing to lose here.  I don’t have many points to defend here.  So it’s just like trying to have fun, go through it.”

The 20-time major champion talked about her biggest strength:

“I think also being the youngest of five really made me have to scrap and be tougher.  I think all those things kind of played into action.

“Yeah, I think that’s probably one of the biggest things in tennis.  It’s great to have a big serve, too.  But I think ultimately sometimes when you’re down and out, you could be the best player in the world, you still get down, but you have to be able to come back.”

She actually hates playing on grass:

“You know, oddly enough, it never has been my favorite surface, but I’ve always done really well here.  I think my game is really suited for the grass.

“You know, yeah, it’s never been someplace like, I love playing on the grass, which is just really weird.  But, again, my game works for it, so…”

“She’s certainly the player to beat.  With all the confidence in the world having won the last three majors, not just the two in this year.  I think those results speak for herself, and she’s certainly the one to beat.”

Andy Murray was asked about the “feminine influence” on his life – marriage and hiring Amelie Mauresmo.

“I mean, I’ve said as well, it’s not so much marriage.  Me and Kim have been together like 10 years now, so…

“Obviously, yeah, I mean, Amélie, really the last sort of 12 months that I’ve been with her, I feel like I’ve come through some difficult moments.  I feel last year, there was ‑ not me, myself ‑ I know there were a lot of people doubting me.  I feel like she stuck with me during that period.

“I had an extremely tough loss at the end of last year.  She was one of the people that really, yeah, stuck by me and supported me.

“I’m glad that I’ve been able to kind of repay her faith in me with some good tennis this year.

“Obviously she’s a very different character to some of the coaches that I’ve had in the past.  I’ve really enjoyed working with her.”

Rafael Nadal on the current problems of the Spanish Tennis Federation.

“So all these kind of things are bad for everybody.  At the end of the day, you know, we are here today.  We will live tomorrow.  Players, presidents, everybody who is making this show last couple of months, what really suffers on all of this is tennis, tennis in our country.

“All the things that goes against tennis in our country is a bad news.”

Are you surprised by how much of a fashion icon you became after the French Open?

STAN WAWRINKA:  It’s not me, my shorts (laughter).