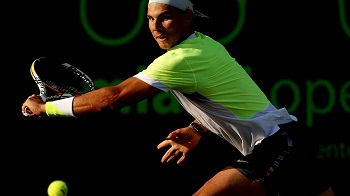 NEW YORK, July 8, 2015 – It will be a great night of tennis for a great cause when 14-time Grand Slam champion Rafael Nadal joins Hall of Famer and fellow former World No. 1 John McEnroe, plus other tennis stars, legends and celebrities, on Wednesday, August 26, for a gala evening to benefit the Johnny Mac Tennis Project. The benefit night will take place at SPORTIME Stadium on Randall’s Island.

In the main event of the evening, the Spanish superstar will compete against another top ATP professional or legend to be announced. The evening will also include pro-celebrity doubles action, featuring Johnny Mac and friends, promising junior players from the John McEnroe Tennis Academy, a lively auction and great hospitality, with all net proceeds to support the efforts of Johnny Mac Tennis Project, a 501(c)(3) public charity.

JMTP provides scholarships, coaching, transportation and other financial assistance to qualified young tennis players in the greater New York area, as well as introducing the sport to hundreds of new junior players each year in the neighborhoods surrounding Academy locations. JMTP benefit nights in previous years have featured Bjorn Borg (2011), Andre Agassi (2012), Jim Courier (2013) and Novak Djokovic (2014). JMTP and Sportime Clubs, home of the John McEnroe Tennis Academy, have already provided over $2.0 million in scholarships and no cost programming to young players in NYC and its surrounding communities. SPORTIME Randall’s Island has been the flagship location of JMTA since 2010.

“Rafa has meant so much to tennis and I’m excited that he’s agreed to be a part of this great cause,” said McEnroe. “He is a first-class individual and has proven to be one of the best players of all time. His participation is a perfect continuation of the tradition of this important annual event.”

As ferocious a competitor as tennis has ever produced, steely in his resolve, unwavering in his convictions, McEnroe was a left-hander who played with singular verve and sparkle. A New Yorker with rare talent, his imagination knew no boundaries. McEnroe’s touch on the volley was golden, and his match playing instincts were remarkably sound. He claimed the US Open crown four times and was victorious at Wimbledon three times. He was an American Davis Cup stalwart, and many believe he may be the greatest doubles player of all time.

Tickets start at $75. For more information and to purchase tickets, go to www.JMTPBenefit.com/rafa.