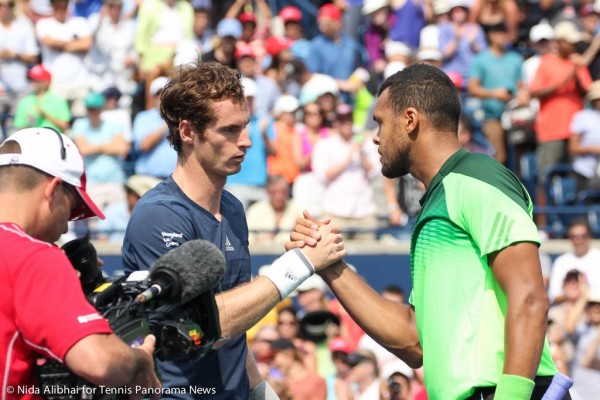 LONDON, UK – The BNP Paribas offices in Central London played host to the draw ceremony for the Davis Cup quarter-final tie between Great Britain and France

France perhaps pulled off the biggest surprise of all by announcing that the French No. 1 and No. 2 would be Gilles Simon and Jo-Wilfried Tsonga, leaving Wimbledon semi-finalist Richard Gasquet off the side.

The British team were predictably in good spirits, laughing at in-jokes, and explaining away the strength in depth that the French have got, and always acknowledging that at any time, team captain Arnaud Clement could change his mind.

James Ward has the task of starting the whole tie off, and with a close history between his coach and Simon’s, the pair probably know their games inside out.

“I know him better than the other guys, I practice with him a lot so he knows my game just as well as I know his. I just need to stay aggressive and try and play my game and not worry too much about him, and yeah see how we get on.”

Simon agreed when asked in the French team’s press conference, adding: “I know what to expect, it will be hard but I think it will be a good match.”

The main focus of course is on Murray, who admitted yesterday that it had taken a few days to get over the Wimbledon semi-final loss to Roger Federer. But within the banter of the team, he was able to put his finger on what to expect when he plays the second rubber on Friday.

“He’s an explosive player, he can serve big, he can get to the net quickly, he can be dangerous,” he said. “The things that I’ll look for is to try and play a very consistent match from start to finish. If his level drops at times where he makes a few errors, try to capitalize on that, but he’s a tough tough guy to beat on this surface.”

There is always the option of adding Andy to the doubles mix, instead of Dominic Inglot who had to struggle to get fit in time for Wimbledon, and a lot will now depend on how that first rubber kicks off.

But one thing was clear – this was a team effort, and not a chance for Andy only to fill any hole in his trophy cabinet.

He said: “I wouldn’t say winning this year is the chance of the lifetime because we’re playing against a great team. It’s not like this is an amazing opportunity because the draw has opened up, this is an easy match or we have an easy path through to the final. It is extremely tough tie, beating the States was hard as well, and yeah it’s an opportunity obviously, but opportunity of a lifetime for me personally, no I don’t agree with that at all.”

As part of the team effort, the team are altogether in a hotel, fostering the team spirit we have seen when they greet the press for these draw conferences. Equally, the French team are just as motivated after their loss to the Swiss last year in the final.

The tie will start on Friday – James Ward v Gilles Simon followed by Andy Murray versus Jo-Wilfried Tsonga. The doubles is expected to be Jamie Murray and Dominic Inglot versus Nicolas Mahut and Richard Gasquet, with the reverse singles on Sunday starting with Murray versus Simon.