You are here: Home / Contributors / Mauresmo, Hall, and Jeffett Headline the 2015 Tennis Hall of Fame 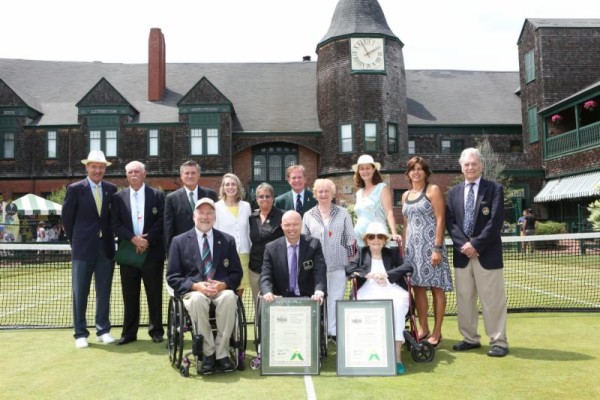 Mauresmo, who could not attend the ceremony due to the impending birth of her first child, was the first Frenchwoman to ever achieve the No. 1 ranking and won two major events in her career, the 2006 Australian Open and 2006 Wimbledon Championships. Her first significant achievement as a professional was in January 1999, reaching her first major final at the Australian Open. The tennis world took notice of her game, a mix of power and grace, and over the next several years Mauresmo added an effective volley and net game to her repertoire. These added dimensions culminated in her most successful year, when she captured two of the four major events in 2006.

In total, Mauresmo won 25 WTA Singles titles, including the year-end WTA Tour Championships in 2005. She also represented France in the 2000 and 2004 Olympics, winning a silver medal in Athens 2004, and was a seven-time member of the French Fed Cup team, including the 2003 squad that won the championship.

Mauresmo retired from professional tennis following the 2009 U.S. Open, but has not disappeared from the tennis scene. Today she is the coach of Andy Murray, the No. 3 ranked player, a rare women’s coach on the ATP Tour. She also successfully coached her countrywoman Marion Bartoli to the 2013 Wimbledon title, and since 2012 has been the coach of the French Federation Cup Team.

David Hall of Australia is a former No. 1 ranked wheelchair tennis player. When he was 16, David was involved in a car accident that resulted in the amputation of both legs. Very soon after, he was inspired when he saw a photograph of a wheelchair tennis player. He used tennis as an outlet, and turned a negative into a positive. His incredibly successful wheelchair tennis career includes six Paralympic medals, including a gold medal in Wheelchair Singles in his hometown of Sydney, and 32 singles championships. Hall was introduced by his former coach, Rich Berman.

Nancy Jeffett was introduced by Hall-of-Famer Pam Shriver. In her comments, Shriver highlighted Jeffett’s accomplishments, most notably co-founding the Maureen Connolly Brinker Tennis Foundation with “Little Mo” Connolly. To this day, the MCB Foundation sponsors junior tennis tournaments, and helps develop and support junior players worldwide. Shriver also noted that Jeffett was influential in the decision to host a 1965 Davis Cup tie featuring Arthur Ashe in a Dallas public park, foreshadowing the move of the U.S. Open to a public facility.