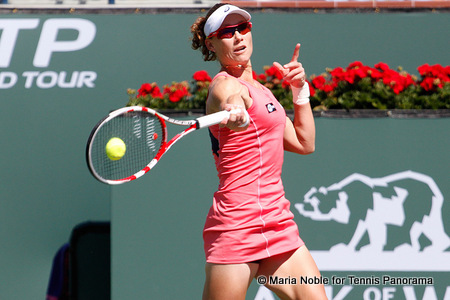 France’s Paire joined the winner’s circle for the first time, claiming the ATP World Tour title at the SkiStar Swedish Open in Bastad when he turned back Spain’s Tommy Robredo 7-6(7), 6-3. Paire is the sixth first-time winner on the men’s tour this year.

“It’s a perfect week,” Paire said. “The conditions today were not easy, but I’m really happy to win against Tommy. He’s a very good player. To play against him in the final and to beat him is a dream, so I’m very happy.

Samantha Stosur rallied to win her second WTA title of the year and eighth overall after defeating Karin Knapp of Italy 3-6, 7-6 (3), 6-2 in the final of the Gastein Ladies on Sunday. The Australian and former US Open champion also won the Strasbourg event back in May.

“I’m so happy I could win here and show good tennis,” said the Ukrainian.

“That’s my goal, getting good results and showing good tennis.”

“Today was very special day,” Thiem said. “We were watched by world’s number one Novak Djokovic,” Thiem said. “Usually he is the one who entertains us with great tennis and today we turned it around.”

“It is really special to win here after playing juniors matches in this stadium,” said Thiem who became the first Austrian to win this title since Thomas Muster did it twenty years ago. “I will have a nice dinner with my friends tonight to celebrate. It won’t be a big party for me as I have to drive eight hours to go to Gstaad tomorrow.”

“Every title you remember. I’m very happy to have won my third title and to defend it here was amazing. I’m really happy with myself… This is my most consistent year.”