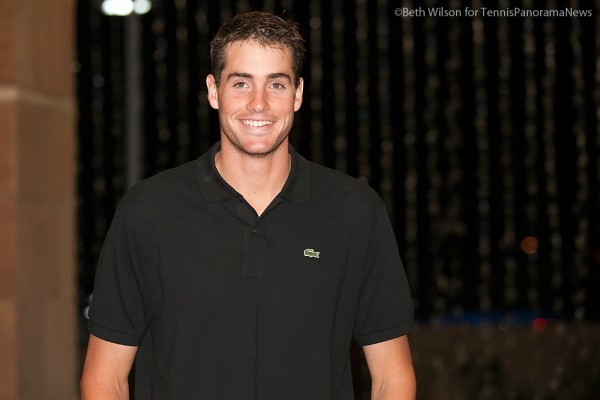 (August 2, 2015) John Isner defeated Marcos Baghdatis 6-3, 6-3 capture his third straight Atlanta Open title on Sunday in 59 minutes. Isner became the eighth active player on the ATP World Tour three-peat a tournament joining active players Roger Federer, Novak Djokovic, Rafael Nadal, David Ferrer, Milos Raonic, Kei Nishikori and Lleyton Hewitt.
“It was a short match against an opponent who wasn’t feeling well, but this week was exactly what I needed, to get matches under my belt,” said the 30-year-old former University of Georgia standout. “It should bode well for me going forward.”

Baghdatis was dealing with an injury which recurred a month ago and he apologized for his performance.
“I didn’t play my best tennis this week but I’m pretty happy with my mental side, I found ways to win,” said the Cypriot. “I played five matches this week…the good thing is that it’s nothing serious.”

“It’s always tough to have a match in (17) hours, especially when your opponent has (22). We are humans, you know, and you want to be able to play a final with the crowd loving it.”

Isner will move up in the rankings to No. 18, while Baghdatis will move to No. 44.

Isner takes the lead in the first week of the US Open Series Bonus Challenge, with the title victory. This year, the Series champions will compete for the chance to win a $4.3 million record paycheck at the US Open — $3.3 million for winning the US Open plus an additional $1 million bonus for also capturing the Emirates Airline US Open Series title. Isner has finished second in the Series’ Bonus Challenge standings each of the last three years. New in 2014 and continuing this year, any player who earns points in three or more Series events will automatically have their bonus points doubled.

Americans Bob and Mike Bryan defeated Colin Fleming of Great Britain and Gilles Muller of Luxembourg 4-6, 7-6(2), 10-4 to win the doubles title. It’s their 107th career crown and fourth of the year.

“Bob and I have really enjoyed playing this fantastic event and couldn’t be more thrilled to come away with the trophy,” said Mike Bryan. “Today’s match was a hard fought battle against a really tough team and it came down to the wire. Luckily we were able to play some great tennis toward the end to swing the match in our favor. The Atlanta fans have been awesome all week and helped push us over the line.”