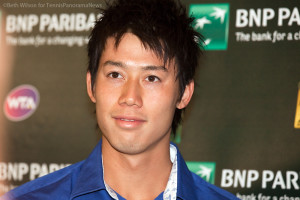 For the 25-year-old Japanese player, this was his 10th career title, while for the American, it was her first trophy on the WTA Tour.

“I didn’t make enough inroads on his first serve,” said three-time Washington finalist Isner of his battle against Nishikori. “If you put a decent amount of first serves in the court, he’s arguably the best in the best in the world from the baseline. It’s tough. I thought he served better in the second and third sets. He’s a great player and a great champion.”

“I fought through (after losing the first set for the third time this week). In the first match I was down 7-6 and came back. It’s not easy but mentally I tried to fight every time and I’m happy to win in the final today.”

Nishikori who is 43-9 on the year will move up to No. 4 in the world with the victory, matching his career high.

Nishikori will move up from No. 5 to No. 4 in Monday’s rankings, equaling his career best.

“I think this tournament is really valuable for our confidence, our momentum going into this hard-court summer,” Bob Bryan said. It was nice to get some revenge on a couple of teams we lost to over in Europe. That will help us going into these next three big tournaments and crescendos at the US Open in New York.” 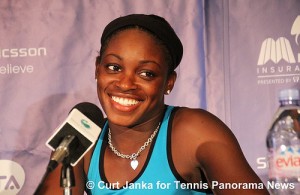 The 22-year-old Stephens, jumped off to a 3-0 lead winning 15 of the first 21 points and never had to look back. This was the first final for the American.

“I just went out there and tried to play the best I could,” Stephens said to media.

“I think I executed my game very well today – it was just a really good day for me.”

“Nothing was given to me. I had to work for everything. It was just nice that all of the hard work and everything I’ve put into it – now I can say that I have a tournament title,”

“It’s great to win this first title – I haven’t even thought about my next goal yet.”

Stephens, who was once ranked as high as No. 11 in the world, will move up from No. 35 into the top 30 when the rankings come out on Monday.