You are here: Home / Contributors / “Getting Myself on Track,” Victoria Azarenka Advances in Toronto 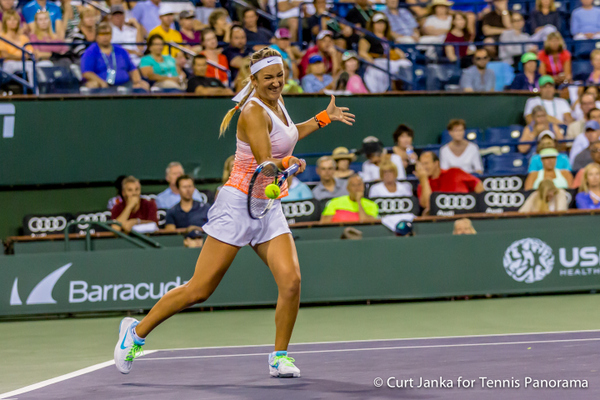 (August 11, 2015) TORONTO, Canada – Life as a touring tennis professional is a lonely one, but the long recovery from a serious injury can be even tougher. Victoria Azarenka struggled with a foot injury in 2014 which caused a serious dip in results, and eventually forced her to cut her year short in September.

With so much time away from the sport, Azarenka was afforded some time to think about herself in a way she might not be able to during the regularly busy tour. “Just getting myself on track, taking responsibilities for your actions, learning from your mistakes, getting organized, which I hate, and now I’m really good at it.” She stressed the importance of improving her relationships with others, even including the media. “Having probably the best relationship with my parents that I ever had. So that was something that I worked really hard on, and it’s amazing to me.” “I feel like I improved a lot with you guys (the media) since wherever I started. So that’s definitely a good job,” quipped the Belurussian, laughing.

While Azarenka admitted to being a perfectionist, she has also admitted to herself that she needs to give herself a break sometimes. “That’s why I need to like sometimes give myself a little bit of a, I don’t know, pat on the back and say good job, because I don’t like to be too satisfied because then I get myself too comfortable and then I’m not motivated.”

The combination of poor results in 2014 and the time off due to injury left Azarenka with a much lower ranking than she is used to. She has welcomed the challenge of boosting her ranking back up, and is not looking back to times when things were a bit easier. “I grew as a player. I have a lot more variety, a lot more power, a lot more consistency and better game overall. So for me, I don’t look in getting back there, because that was something I wanted to build from.”

“I have to slowly and steadily be coming my way up and I’ve been playing really good. I just lost a few times to a number one player, and I think a top ten player. I’m not developing my game. I’m just improving details. For me it’s just going after it and working really hard and giving myself the best opportunity to take out the best quality.”

When asked whether or not the tour felt new again after such an extended break, Azarenka could not help but poke fun at herself. “I just turned 26, and I can’t believe that, actually. Everybody says, hey, you are still a baby, and to me it feels like it’s been forever I’ve been playing on tour.”

Azarenka defeated Elina Svitolina 6-1, 6-4 and will face Petra Kvitova Wednesday in the second round of the Rogers Cup in Toronto.