You are here: Home / Contributors / Eugenie Bouchard Continues Slump with Opening Round Loss to Belinda Bencic in Toronto 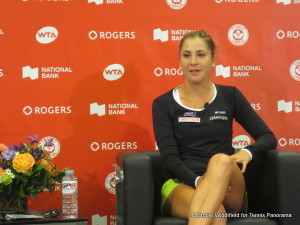 (August, 11, 2015) TORONTO, Canada – Another tournament and another early round loss for Eugenie Bouchard. Despite showing flashes of her spectacular 2014 form, she failed to escape her first match in a Canadian tournament once again and fell to an impressive 18-year-old Belinda Bencic 6-0, 5-7, 6-2 at the Rogers Cup.

The first set may have been one of the worst of the young Canadian’s career. She looked nervous and lost for ideas as she hit 15 unforced errors to her opponent’s zero and failed to impose herself on the match. She looked a step slow and her backhand looked particularly volatile.

Bouchard fought back in the second, however, and showed shades of the form that brought her so much success in 2014. “I didn’t freak out, I just thought to myself that I was just shaking off the rust a little bit, and I really didn’t panic.” She began hitting her backhand down the line and pushing the ball into space which led to some long, thrilling rallies. The Canadian crowd came alive, and Bouchard saved a match point en route to winning the set, 7-5.

Unfortunately, it was all for naught as Belinda Bencic raised her game, cut out some of the errors that plauged her in the second set and went on to take the match 6-0, 5-7, 6-2, all despite a crowd wildly cheering for her opponent. Bouchard has now lost 13 of her last 15 matches.

In some ways, it was the perfect representation of two young players whose careers have been heading in opposite directions this season. However, Bouchard was upbeat after the match, and saw the flashes of good play in the second set as a sign of an upward turn. “I’m pleased with my performance. It’s for sure a step in the right direction. I played the whole match pain free, that was one of the goals, the most important one, maybe. I’m going to go into the next few weeks with some goals, and just try and build on this match today.”

She will head to Cincinnati and then New Haven in search of more match play and more importantly, wins. Whether or not she will search for a new coach remains unsure, after splitting with Sam Sumyk after the end of Wimbledon. “It definitely wasn’t working. There were some big problems, and I just felt like I had to make a change.”

For Bencic, it is another fantastic win in a year that was highlighted by a title run in Eastbourne. “The crowd was on her side, but I enjoyed the atmosphere – to play on such a big court was also fun for me. I really like it here.”

The young Swiss player will take on Caroline Wozniacki – a player she beat on her way to that very title in Eastbourne this year – and knows what to expect. “Obviously she brings really a lot of balls back, and she doesn’t miss a lot. I know how to play against her. I’m ready for tomorrow, I hope.”