You are here: Home / Contributors / Simona Halep Safely into the Final 16 in Toronto While Five Seeds Fall 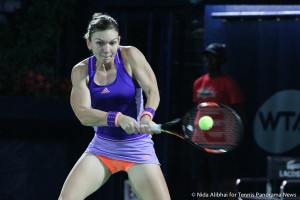 (August 12, 2015) TORONTO, Canada – While much of the mainstream media’s attention has been on the baffling struggles of Eugenie Bouchard, Simona Halep has quietly had a disappointing 2015. After falling in the quarterfinals of the Australian Open, she went on to win Indian Wells – the biggest title of her career. Beyond that, it was disappointment as she fell in the second and first rounds of Roland Garros and Wimbledon, tournaments she had made the final and semifinals of just a year prior.

The 23-year- old Romanian admitted to being tired after Indian Wells and Miami. “At the beginning of the year I played some good tennis, but after I lost at two grand slams were last year I played good tennis. But maybe I couldn’t handle the pressure, and maybe I was a little bit tired. My life has changed a lot. Obviously everyone in my country is recognizing me and it’s a little bit tough. I have to accept and go forward.”

After a post Wimbledon break with her family, Halep decided to play Toronto, and the fans in Canada could not have been happier about her decision. Romanian fans came out in droves to support Sorana Cirstea during her unlikely run to the final in 2013 in Toronto, and they were chanting Simona‘s name after just the first game.

“I’m really happy that I have such a big support. Romanians are everywhere, so I really want to thank them for supporting me. It’s really nice to see our flag everywhere. Many Romanian words in the crowd. So that makes me happy on the court and makes me more, you know, more stronger that I have big support, and I can say that I fight easier.”

The support certainly did not hurt. Halep came out of the gate strong against Jelena Jankovic Wednesday afternoon. Changing directions early in the rally and keeping the ball deep, she was consistently on top in rallies. “I tried just to be aggressive, to take the ball as soon as possible, because I know that she has good defense. I tried to keep my first serve in because she’s returning well. I tried to play her forehand more, because I know she has a strong backhand. I didn’t want to rush myself, just go into the court and just to take the ball fast and to open the court.”

Continuing to move well and keeping errors low, the good form continued into the second set and Halep went on to take the second round match 6-3, 6-4. “I can say that I had stress free because I did not have expectations for this match because I had a long break. But I did pretty well today and I’m really happy I could win in two sets.” The win could set up some of the best matches of the tournament, as Halep will face Angelique Kerber on Thursday and potentially Agnieszka Radwanska in the quarterfinals.