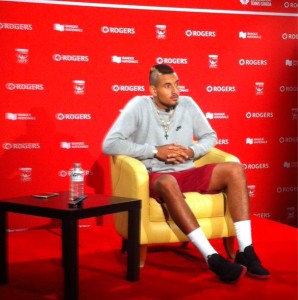 (August 13, 2015) MONTREAL, Canada – There are days when the actual tennis results become secondary, and today was one of them. While multiple matches were going on all around the grounds of the Montreal Rogers Cup presented by National Bank, only one person was on everyone’s mind: Nick Kyrgios.

The Australian rarely leaves anyone indifferent. For example, he came to Montreal with a new hairdo, a Mohawk that’s bleached on one side and bright pink on the other. Some like his showmanship, some believe that he should let his tennis do the talking. But on Wednesday night, everyone agreed that he stepped over the line in his match against Stan Wawrinka.

Right after finishing the first set, Kyrgios and Wawrinka got in a small argument over the Australian’s serving rhythm: Wawrinka felt like Kyrgios would not let him have enough time between serves. Up 30-0, Kyrgios hit an unreturnable serve, got back to the wall, and under his breath, monologued on the intimate past of Wawrinka alleged girlfriend, WTA player Donna Vekic. The comment was picked up by the television microphone, and uproar exploded right away on social media.

Asked about the comment by local television in his post-match interview, Kyrgios justified himself on the ‘heat of the moment’. Later on, Wawrinka deemed the comments as ‘inexcusable’, said he confronted Kyrgios in the locker room and hoped that the ATP would sanction his opponent. And they did.

Indeed, on Thursday, the ATP announced that they fined Kyrgios for the on-site maximum of 10,000$ for insulting comments, as well as an additional fine of 2,500$ for unsportsmanlike conduct related to a comment made to a ballkid during the match. They also gave Kyrgios a ‘Notice of Investigation’, which opens up the possibility of further penalties such as monetary fines and/or suspension from ATP events.

Many wondered how the Rogers Cup fans would react to this situation. When Kyrgios stepped on Court Banque Nationale late on Thursday afternoon for his third round, he was welcomed with insistent booing from the crowd. On the other hand, his opponent John Isner, was strongly applauded. Isner, who had defeated Canadian player Vasek Pospisil the night before, went from the bad guy to the good guy in a matter of hours. And, as the saying goes, the good guy always wins, as Isner got through 7-5 6-3.

Except for a release on his Facebook page, which screamed PR crisis management, Kyrgios had not commented on the situation before his match. Everyone was therefore waiting for the post-match interview to get his side of things. But they didn’t get much, as Kyrgios was obviously closed and not talkative. ‘I just lost’, he said to explain his lack of answers. ‘Is that the only reason? Is the drama over for you?’ a journalist replied. ‘Yeah, yeah’.

It was also obvious that journalists would use other post-match interviews to get the players’ opinion on the subject. Novak Djokovic showed some signs of wisdom: ‘I’ve been here for about a decade, and it’s important to have respect between the players and towards the sport. He has to learn how to deal with that.’ Andy Murray linked the comments to Kyrgios’ age: ‘He’s a young guy who is growing up in the spotlight. There’s been a lot of negativity towards him over the last few months, that isn’t easy to deal with. People need to give him a little break; he’ll learn from it and become a better person.’ Rafael Nadal was a lot less apologetic: ‘Age is not an excuse. Most of the players started the tour very early, it is just about respect. The world of tennis, I think we should be an example for a new generation of kids, obviously yesterday was not one of these moments.’

This story filled up a day which was, tennis-wise, pretty uneventful, as all the favorites got through somewhat comfortably. The quarterfinals will feature number one player Novak Djokovic, who only dropped three games against Jack Sock, against qualified Ernest Gulbis. Isner will face surprising Frenchman Jeremy Chardy, while two blockbuster matches will happen in the bottom half, with 7th seed Rafal Nadal facing 4th seed Kei Nishikori and 2nd seed Andy Murray facing 10th seed and defending champion Jo-Wilfred Tsonga.