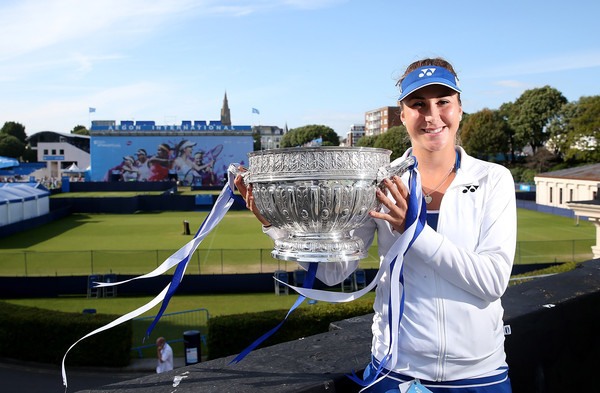 (August 16, 2015) TORONTO, Canada – Nothing about Sunday’s final between Simona Halep and Belinda Bencic was ordinary.

While everyone would have reasonably expected to see the second seeded Romanian Halep in the final, no one saw the fairy tale run of 18 year old Belinda Bencic coming. The young Swiss eliminated a whos who of top WTA players – Bouchard, Wozniacki, Lisicki, Ivanovic and finally Serena Williams Saturday night.

The dramatic turns of the match itself were befitting to what has been a dramatic week of tennis in Canada overall. With the sun beating down, the players traded five consecutive breaks to kick things off. Both players were changing directions often, creating many long, intriguing rallies from the baseline.

And then, the crowd. While there has been a large contingent of vocal Romanians in the crowd all week, they were the most vocal for the final. At one point, chair umpire Marija Cicak even said the Romanian word for thank you, “mulțumesc”, in order to try and quiet the crowd, which was met with an eruption from the crowd’s Romanian fans.

For all their cheering, Bencic was unfazed as she squeaked out the opening set in a tiebreak, 7-6(5), in well over an hour. “It’s amazing that the atmosphere is so great even if it’s against me. The people are very excited, and really, I feel like it’s the right thing. I think some people in some other tournaments should take an example from here.”

And then the match turned again.

Halep began receiving treatment for her left thigh, which seemed to be impeding her movement. Later in the set she had blood pressure taken, was wrapped in ice and drinking liquids in an attempt to keep her energy up. “We both were fighting so hard,” said Bencic. “We had long rallies, so it was obvious that we were very exhausted, both.” Amazingly, she took the second set in a tiebreak, barely reacting and simply hanging her head as she walked slowly back to her chair.

“I had great victories,” said Halep. “So I take only the positives. I’m thinking to play Cincinnati, then I am entered on the New Haven tournament. And then US Open. So I don’t change anything right now. So I will see next days.”

This is the second title of Bencic’s season, and without a doubt the biggest week of the 18-year-old’s career. “I just feel like I improved myself, also in the game, but also in how I understand the game and know the opponents well and try to think on teh court and what I need to do. And I’ve also grown as a player. I think my service improved a little bit. And I feel like I still have potential to go better, to play better and to serve better and just everything.”

“Obviously it’s very big boost for your confidence. Now I actually feel like I belong here, and that I can be really one of the top players. It’s an amazing feeling.”

Brodie Widdifield is the author of the tennis web site mindtheracket.com. You can also follow him on Twitter at @MindTheRacket. He was covering the Rogers Cup in Toronto for Tennis Panorama News.