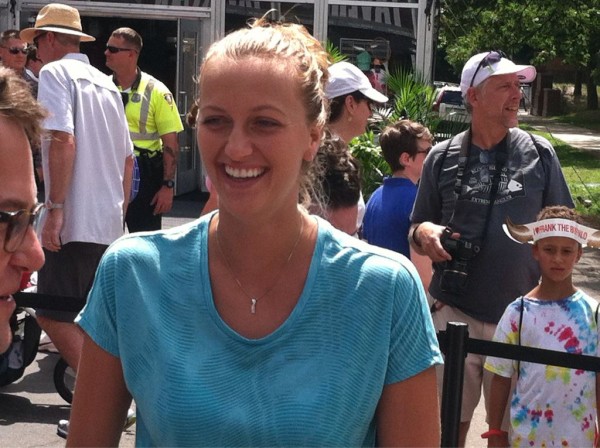 (August 23, 2015) NEW HAVEN, Connecticut – For the first time since 2006, the field at the 2015 Connecticut Open features five of the world’s top ten women’s players, and that depth should make for an unpredictable event. Here are some highlights of this year’s top entrants:

Simona Halep (No. 2) 2013 New Haven champion was the top seed, and she has played well this summer, coming off of back-to-back finals in Toronto and Cincinnati. She withdrew from the tournament on Sunday night.

Second seeded Petra Kvitova (No. 4), the defending champion, also receives an opening round bye. Kvitova has not won a match since Wimbledon, and she recently disclosed that she was diagnosed with mononucleosis, which helps to explain her recent listless form. The good news for Kvitova is that she thrives in the laid-back environment of New Haven, having reached three consecutive finals here, and is one of two players to have defeated top ranked Serena Williams in 2015.

Caroline Wozniacki (No. 5) is a four-time winner in New Haven, and seeded third at this year’s event. She was not initially planning to play the Connecticut Open, but early round losses in Stanford, Toronto, and Cincinnati have her looking for more match play before the U.S. Open, which begins August 31st. In pre-tournament interviews, Wozniacki has proclaimed herself fit and ready for action.

Lucie Safarova (No. 6) had the best result of her career in advancing to the 2015 French Open final, where she battled Serena Williams for three sets before losing. That result has catapulted her into the top ten for the first time in her career. Safarova has had mixed results since Paris, including a first round exit in Toronto to Daria Gavrilova, who she will face in a re-match in her opening round in New Haven.

A year ago, Karolina Pliskova (No. 7) was ranked 69th and won only two games in her first round qualifying match in New Haven. Much has changed in the last 12 months for the 23-year old Czech. She has reached eight WTA finals, winning three of those (Seoul, Linz, Prague). Success has evaded Pliskova in the Grand Slam events, but she has proven to be a consistent threat at the other tour stops.

Other players that could contend at the Connecticut open include: a pair of Wimbledon finalists, 2012 runner-up Agnieszka Radwanska (No. 15), and 2014 runner-up Genie Bouchard (No. 24); another major finalist in 2012 French Open runner-up Sara Errani (No. 16), former top ten player Flavia Pennetta (No. 26), rising young American Madison Keys (No. 19) who reached the 2015 Australian Open semifinals, the Swiss veteran Timea Bacsinszky (No. 14) who reached 2015 French Open semifinals, and Elina Svitolina (No. 20) a 20-year-old Ukranian who has risen quietly up the rankings in 2015.