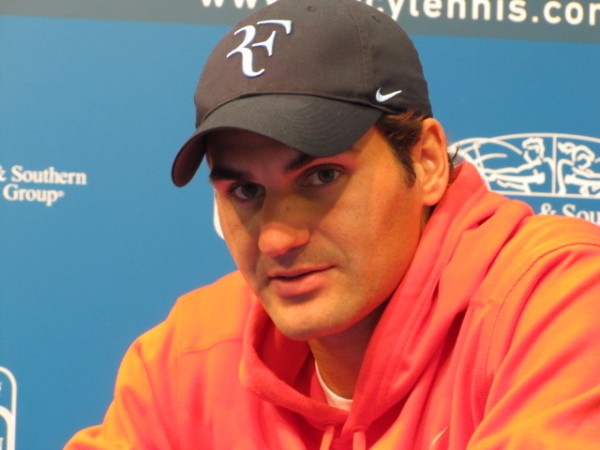 (August 23, 2015) Serena Williams and Roger Federer became the first women’s and men’s champions to defend their Cincinnati titles since the lat 1930s on Sunday. Williams defeated new No. 2 player Simona Halep 6-3, 7-6(5) for her second Western and Southern Open crowns while Federer stopped top ranked Novak Djokovic 7-6(1), 6-3 for his seventh.

Federer prevented Djokovic from claiming the only Masters 1000 title he has never won.

“The fifth time I’ve been in the title (match) and never won this title, so I guess I have to wait for Roger to retire,” Djokovic said. “I’ve been coming back each year wanting it more.”

“I really hope you can win here someday,” Federer told Djokovic during the trophy ceremony. “He deserves it. C’mon, so close.”

The win puts the 34-year-old Swiss back up to No. 2 in the world and gives him his 24 Masters title and 87th career tournament title. He is 7-0 in Cincinnati finals.

“I think I moved well,” Federer said. “I was explosive moving forward. Volleys were good. I think from the baseline was hitting my forehand very well. I was serving very well this week, don’t get me wrong, but I still think there was a little bit more room for improvement on the serve. I wasn’t always hitting all spots as perfect as I was hoping it to be. In practice I didn’t feel this good, to be quite honest.

“This has always been a good week for me. I think the volunteers make a wonderful tournament with the tournament director, and it’s very fan friendly as well. I get in touch a lot with the fans this week. It’s just a nice venue. Great center court. Good atmosphere. Good court speed for me. So many things for me to like about it.  Those are the reasons I’m sure I play well here.”

“Well, it’s the sport,” the Serbian said of the loss. “You can’t win all the time. I won many matches this year. Of course it’s disappointing at this stage to reflect on the match. Could have done some things better, but I lost to a better player, no question about it. I have to deal with it. US Open is around the corner, and I have to already turn the next page. Hopefully I can do well there.”

“I’m ready,” Williams said. “I don’t care if I win or lose or break even. I’m ready to start it, get it over with, and be done and go on to the next event. But I’m so ready for New York. Let’s go, right?”

“I know you can do four,” Halep said to Williams during the trophy ceremony.