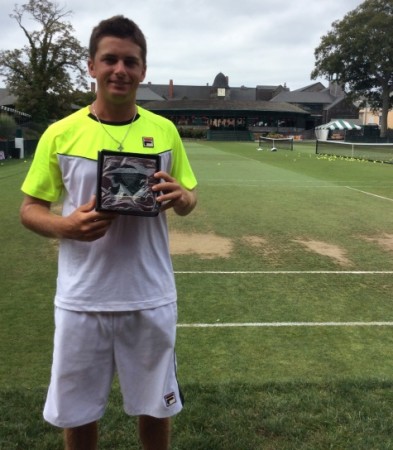 Playing at the site of the International Tennis Hall of Fame in Newport, R.I., where his grandfather was inducted in 1967, Riggs ran through the draws as the top-seeded player in the singles, doubles and mixed doubles to capture three USTA gold balls.

“At the beginning of the day I thought about it, definitely,” said Riggs, who repeated the singles title he won last year. “After I won the first in singles I tried not to think about it because I didn’t want the added pressure.”

Riggs, 22, started his collegiate career at Cornell University where he played for two season before transferring to Division II Lynn University in Boca Raton, Fla., where he is studying hotel management. Riggs and his parents reside in nearby Pompano Beach, Fla.

“My dad always talks to me about my grandfather, and what a great player he was.” Riggs said. “It’s an honor and a privilege to do something he did, even though it can’t compare to something like winning Wimbledon.”

Riggs was coached all week by his father Larry, a former men’s coach at Pepperdine University.