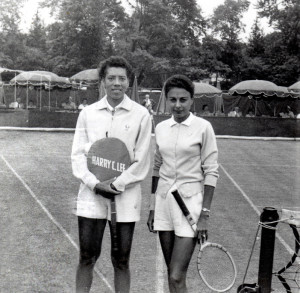 (August 24, 2015) NEW YORK, NY – With the celebration of what would have been Althea Gibson’s 88th birthday on August 25, it’s Althea Gibson Week. This week not only commemorates her accomplishments at the US Open, where she won singles titles in 1957 and 1958, but also the national broadcast debut of the documentary film ALTHEA, on PBS’ American Masters, Sept. 4th, 2015 at 9 p.m., with an encore on WNET, New York on the morning of the US Open men’s final on September 13th.

All over the New York City area, special screenings of the film will be taking place, before its broadcast television debut.

Tennis Panorama had the chance to speak with ALTHEA filmmaker Rex Miller about what this week means to him. Miller’s mother played with and against Gibson.

“For me it’s all about Althea, and our team, we call ourselves “team Althea,” Miller said.

“I was fortunate enough to get great people fired up about this project, they’ve put up a lot of work and personally my biggest enthusiasm comes from the film. We are going to be having four events in Harlem this week, and that’s real exciting because that’s where Althea grew up. We had a goal of helping althea get re-recognized. We wanted to take her to icon status, that may or may not happen, I think she deserves that. But to have her recognized, especially in Harlem is just awesome, in Queens and Long Island as well.

“Althea’s story to me is important on several levels,” Miller said.

“For the tennis fan, obviously it’s a tennis story, and a sports story. But it’s also a civil rights story because Althea achieved all of this in the early 50’s. I mean she broke the color barrier in 1950, then she went on to win the US Nationals, Forest Hills and Wimbledon in 1957 and 58. This is the time of Emmitt Till, Rosa Parks and lynchings in the south. Long before Arthur Ashe, long before Martin Luther King.

“She really was heroic in having to break down barriers during this time, way back in the early 50s. She overcame all of these obstacles and her achievements span across many areas.

“Not only did she breakthrough in tennis, she also played pro golf – the first female African American to be on the LPGA tour.

“She sang at the Wimbledon Ball, on the Ed Sullivan Show live. She was in a John Wayne film, directed by John Ford.” Gibson also made an album. On top of all of this, Gibson also earned a college degree at Florida A&M.

“She’s a role model for kids today of any ethnic group,” Miller said. “So her story is important.”

There is also an outreach component to the film in which many schools have had screenings of the film which have been successful. “It has worked so well that we are working with our various outreach partners, including the USTA and setting screenings over the next year.”

Here is a list of scheduled events for Althea Gibson Week:

The Harlem Junior Tennis & Education Program will host a viewing of the Althea at the Harlem Armory where Althea trained and competed. Katrina Adams, Dante Brown, Directors. Filmmaker Rex Miller will join the audience for a Q/A following the screening.

Aug 25 : Films at the Schomburg

For more info please visit Films at The Schomburg

The Queens Museum presents the Queens Premiere of ALTHEA, as part of Queens Day at the US Open.

The West Side Tennis Club, Forest Hills, hosts a screening of ALTHEA. Reception and outdoor screening on the grass courts just after sunset. Visit the legendary site of Althea’s groundbreaking 1950 match against Louise Brough, and her 1957/58 US National titles. In the shadow of the grand old stadium, built in 1923 and recently renovated, the film will be viewed after sunset on a 20′ screen. Cocktails available beforehand. Q&A with director Rex Miller to follow. For more info Forest Hills

TICKETS: Open to public, please RSVP as seating is limited

Aug 29 : The Jungle: Re-dedication of courts

The David Dinkins Tennis Club at The Jungle presents, “A re-dedication of the Althea Gibson and Sydney Llewellyn courts at The Jungle public courts”, 7th Avenue and 150th St., Harlem, in honor of those who have contributed to the Jungle’s legacy. This year’s inductees will be David Dinkins and tennis great Bob Ryland. The ceremony will start at 10:00 AM. It will be followed by a party for kids and their parents, in conjunction with our weekly “Free 10 and Under Family Tennis/Reading Program.” All are welcome!

*Parking is available up the school’s ramp next to the park at 7th Avenue and 150th St.

TICKETS: FREE – All are welcome!

This premiere is sponsored in partnership with the USTA Eastern Long Island Region.