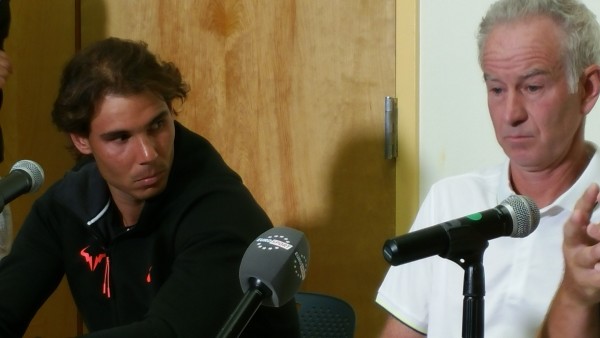 (August 26,2015) NEW YORK, NY -With drawing cards like 14-time major champion Rafael Nadal, 2001 US Open champion Lleyton Hewitt and the legendary John McEnroe himself, it’s no surprise that the Johnny Mac Tennis Project drew a near-capacity crowd to Randall’s Island on a balmy Wednesday evening for the fifth edition of his Johnny Mac Tennis Project (JMTP) exhibition. The event was held to raise funds used to provide financial assistance to qualified young tennis players.  Sportime Clubs, home of last night’s event and McEnroe’s eponymous tennis academy and the JMTP, have already provided over $2 million in scholarships and assistance in part paid for by this annual event.

Long considered an iconoclast in the sometimes hidebound world of tennis, McEnroe’s mellower side was on display at last night’s event.  He was effusive in thanking his guests, particularly Nadal, of whom he said “He’s done me a huge favor and I owe him one big time,” said McEnroe.  “He’s come here for nothing and it is very, very much appreciated.” In another exchange he added, “When you get to be stature of Rafael Nadal, you expect people to come up to you, even the older players, to pay respect to you. Rafael’s never been that type.”

While McEnroe’s was unguardedly positive about Nadal he adopted a different, more protective stance regarding Nick Kyrgios. With McEnroe’s desire to keep the event and crowd focused on the good work of the JMTP, Kyrgios, who to his credit honored his commitment to attend, was largely relegated to the background. With Kyrgios still under heavy fire in the court of public opinion for his comments in a match against Stan Wawrinka two weeks ago, McEnroe announced to the gathered press that the Aussie would not be playing singles against Nadal as initially scheduled. “Nick Kyrgios is going to be playing doubles with me, along with my brother [Patrick] and Jonas Bjorkman,” McEnroe started. “I made a decision based on some of the ongoing stuff. While I want to be supportive of Nick and think he’s a tremendous talent…It would be better served for him at this particular time to maybe take a step back.”

Top draw Rafael Nadal would instead square off against another former World No. 1 in Lleyton Hewitt for an eight-game pro set.  The match, though just an exo, was typical of the Spaniard’s two steps forward/two steps back season-to-date. Nadal flashed vintage moments including an well-placed ace that helped him dig out of a love-40 hole on serve and a screaming backhand down-the-line winner that brought a big smile to his face and a 4-1 lead on the scoreboard.  The sparkling moments were tempered though by frustrating periods of imprecision.  He gave the net tape a workout at points and seemed to guide more shots than usual long.  The inconsistency left Nadal, who opened up a 6-3 lead in the eight game pro set scrambling to keep the lid on Hewitt in an 8-7(5) win that was closer than the early going would have indicated.

The exhibition was held in advance of the year’s final major, the US Open which commences Monday.