You are here: Home / Features / Serena Williams has Competitive Quarter in US Open Draw 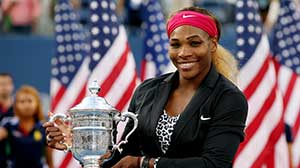 (August 27, 2015) FLUSHING MEADOWS, NY – The singles draws were held for the US Open on Thursday. Defending champion Serena Williams, who is seeking to complete the first Grand Slam since Steffi Graf accomplished the feat back in 1988 faces a competitive quarter of her draw. Williams, who is a six-time champion could face US countrywomen in the third and fourth rounds – Sloane Stephens and Madison Keys. Also in Williams’ quarter of the draw is her sister Venus Williams and Belinda Bencic, the 12th seed, who defeated Serena in Toronto just two weeks ago.

”You have Sloane, I seem to play her every tournament,” Williams said to media. ”Madison is playing really well. So is Sloane, actually – she’s playing excellent. So it’s not anything simple or easy to go through.”

Serena could potentially face third seed Maria Sharapaova in the semifinal. The world No. 1 opens her quest for her 22nd major against Russia’s Vitalia Diatchenko ranked 86th in the world.

“But like I said, I feel like I don’t put that pressure on myself to do anything here ’cause I’m obviously going to be excited to compete next year and just keep going and have fun.”

“I think being experienced has really helped me a lot, helped me get through a lot of matches. It’s helped me overcome a lot of things. Yeah, it’s been great. I’ve really enjoyed it. I know some matches I got through just on my experience alone, so that’s been really able to help me out.

On the men’s side of the draw, top seed Novak Djokovic could face eighth seed Rafael Nadal in a quarterfinal clash in Flushing Meadows. Second seed Roger Federer and third seed Andy Murray are on the other side of the draw. Murray has a potentially extremely competitive opening match against Nick Kyrgios. Nadal also will have all he can handle against Borna Coric in the first round.