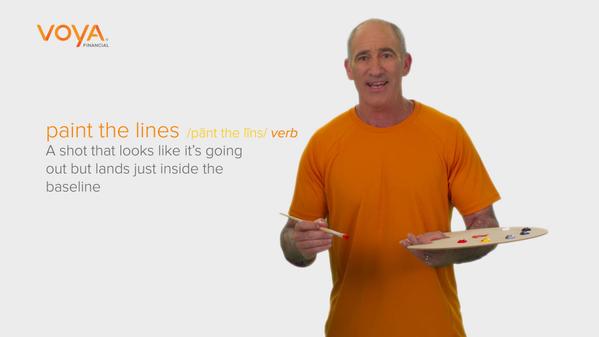 Voya’s sponsorship of ESPN’s coverage spans the entire duration of the US Open and will air over two weeks — from Aug. 31 through Sept. 13 — across ESPN networks. The agreement features a number of media rights including significant commercial inventory, live Voya “Bench Talk” segments with accompanying graphics and audio mentions, and the debut of 360-degree “freeD” replay technology with Voya on-screen branding.

Gilbert spoke to Tennis Panorama News to talk about the videos and the US Open singles draws which were made on Thursday.

Tennis Panorama News: Let’s talk about the men’s draw first. What were your impressions?

Brad Gilbert: There are about a half a dozen really good popcorn matches in the first round. We’re going to have some intriguing matches.

I think Djoker (Novak Djokovic) got a great draw and down on the bottom (of the draw), I’m not really sure if he had a good draw or a bad draw, if (Roger) Federer is playing the way he did in Cincinnati, I think he’s in store for a big run. It’s been six years since he made a final at the (US) Open. What he showed in Cincinnati was really impressive. I’m looking forward to see if he can bring that in New York.

TPN: Can you predict the winner after seeing the draw today?

BG: No. I will pick a winner in a couple of days. I do it for ESPN.com. One thing’s for sure, sometimes you look at a draw, you look at a brutal draw and a couple days later it can open up. So, Serena’s (Williams) draw on paper is brutal, but you never know if she’ll have to navigate all the way through the draw the way it is ‘cause things can change.

Last year was a major surprise (on the men’s tour) with what we had and probably the first time, we had a couple of surprises. We had Stan (Wawrinka) winning (the Australian Open) and (Marin) Cilic (US Open) – I don’t think we are going to see a major surprise like that this year (at the US Open) that’s for sure.

TPN: So do you want to go out on a limb and make a prediction for the women?

BG: No, not yet. I have to think about it for a few more days. I usually fill out 2 or 3 draws. I sit there and scratch through them in my room until I come up with the right one.

TPN: I want to ask you about your new videos that were launched Voya Financial. How much fun was it making them, especially with your unique spin on things.

BG: It was a blast doing them. Obviously Voya is a great company. They had a tremendous team making me look good. And one of the coolest compliments – I had a young kid come up to me and say “Are you that YouTube dude?” (Laughter)

Videos called Moonball, Flatliner, Fearhand and Dead Let Court will be released during the US Open.

Karen Pestaina for Tennis Panorama News at the US Open.