You are here: Home / Features / Petra Kvitova and Kevin Anderson Win Titles Leading into the US Open 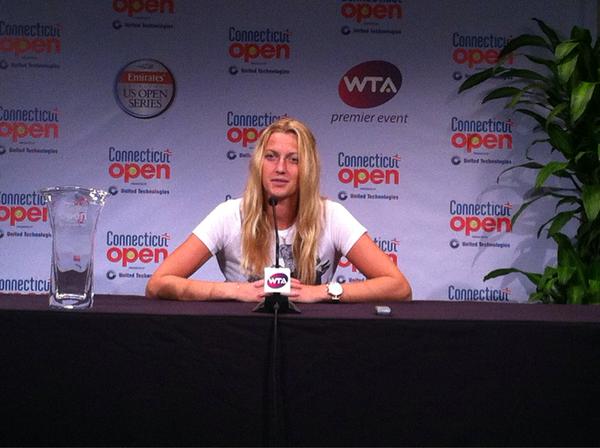 “It’s the first time I’ve defended a title, it’s a really good to have that experience,” said Kvitova.

“It definitely helps with my confidence going to the US Open. I’m looking forward to my next match.”

“I feel terrible, but it doesn’t matter. I will have day off tomorrow.” Kvitova has been recovering from mononucleosis.

“I’m really pleased,” Kvitova said about the win. “I didn’t really come here with a good kind of confidence and game and everything. But everything turned around. I have it again. I’m happy because of the trophy here.”

“She’s a big hitter, so she is putting a lot of pressure on you serving really big,” said friend and Fed Cup teammate Safarova. “It’s kind of hard to break into her serve, and it puts extra pressure on your serve.

For Kvitova, it’s her third title of the year and 17th of her career.

For both women, the next stop will be the US Open which begins on Monday, but both women play their opening round matches on Tuesday.

Kevin Anderson of South Africa returned to the winner’s circle for the first time since 2012 when he beat French qualifier Pierre-Hugues Herbert 6-4, 7-5 in the Winston-Salem Open final on Saturday.

No. 15 Anderson last won a title in March 2012 at the Delray Beach. This was his third career title on the ATP World Tour

“Coming into the week, I had some high expectations,” Anderson said. “But I was thinking back to my first match against (Kazakhstan’s Mikhail) Kukushkin on Court 2, and not playing the best first set. I had to save a bunch of break points and getting broken, and even breaking my racket.

“But things seemed to click after that – I felt I served very well throughout the week. But as each match progresses and you get closer to the finals, and a chance of winning the tournament, that starts to play in your mind.”

The victory for Anderson breaks a seven-match losing streak in ATP World Tour finals, dating back to Sydney 2013.

“I’ve been in a few finals and come up short, which is always tough. Each final is a different situation, and for some reason it just hadn’t happened for me. Someone has to win and someone has to lose.

“Maybe it’s a bit of an added pressure to be the favourite coming into the final, but [Herbert] has been playing great to get here. In my mind we were completely even before the match.”

“But if feels fantastic to get that win. It’s been a few years since I’ve won a tournament, and it’s definitely something I can look back on and feel happy about.”

“It’s been a very positive week,” Herbert said. “I came here to play some matches; I didn’t expect to play that many matches. But I’m arriving at the U.S. Open with a lot of optimism.”

Herbert came into the tournament through qualifying. “I came here to play some matches, but I didn’t expect to play that much. I’m really happy since it’s the best result of my career. There are no regrets because I think I played a good final, but [Anderson] was better and more experienced today.”