You are here: Home / Features / Serena Williams Advances Easily While Fourth Seed Nishikori Falls on Day 1 of US Open 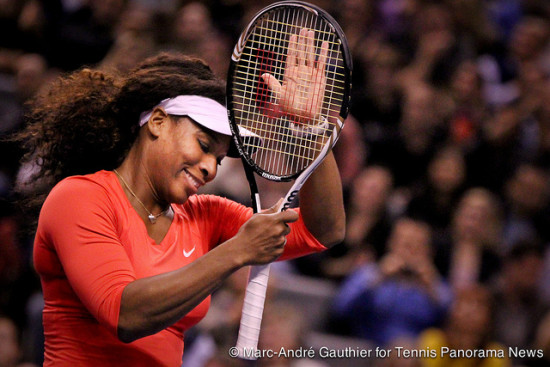 (August 31, 2015) FLUSHING MEADOWS, NY – Last year’s US Open men’s finalist and fourth seed Kei Nishikori lost in the first round on Monday while several women’s seeds tumbled out on the first day of Flushing Meadows.

No such drama for the No. 1 seed Serena Williams seeking the US Open to complete a calendar Grand Slam. She moved a step closer to history with an easy win over 86th ranked Vitalia Diatchenko of Russia who retired from the match trailing 6-0, 2-0. She said that she felt a sharp pain hitting a backhand during a point.

“It was definitely different and bizarre,” the 33-year-old Williams said. “But at the same time, I was still focused. I kept thinking: Just stay focused; don’t lose it. You never know what can happen.”

Williams march to completing the first Grand Slam since 1988 seems to have been made easier when a deluge of seeds from her half of the draw lost. They included: No. 3 Maria Sharapova who withdrew on Sunday with an injured right leg, No. 7 Ana Ivanovic, No. 8 Karolina Pliskova and No. 10 Carla Suarez Navarro, No. 21 Jelena Jankovic, No. 29 Sloane Stephens (who beat Williams in the quarterfinals of the Australian Open in 2013) and No. 30 Svetlana Kuznetsova.

The 21-time major champion will play the Netherlands Kiki Bertens. “I think she’s playing well, Williams said. “She does a lot of things well. She has a big serve. It’s definitely something that I look forward to. See what happens.”

“I’m not a person that usually looks at the draws,” Williams said. “I just take it as it comes and as it goes.”

“You know, try to think about next one, and I hope I can come back strong next year.”

“Today for me, when I come on court I know I can beat Nishikori,” Paire said. “I place twice time; I lost two time, but very tough match.

“So when I come on the court, I say, come on. You can beat Kei. He has a game — it’s not like if I play against Roger Federer. For me it’s different because he has good serve.

“Against Kei I know I can play, and for sure some volleys. For me it’s important because I know I don’t put a lot of pressure on myself. I say, Okay, for sure you can break him.

“I think this tournament is giving me the best chance to play the best over here,” Marin Cilic said. Even before last year, in the past years I was always playing pretty well and reached few times quarterfinals. Even in those matches had some chances. Close to making it to the semis.

“Coming this year again is definitely very special moment for me in my whole career. This experience of, you know, defending the Grand Slam title for the first time is something that I’m going to learn for sure a lot from.”

“I couldn’t ask for a better opening of this year’s US Open,” Djokovic said.” Hopefully I can continue in that rhythm.”

Sixteenth seed Gael Monfils retired from his match with a back against Illya Marchenko while trailing 2-6, 6-4, 5-0, 30-0.

Eighth seed Rafael Nadal, playing in the Flushing Meadows for the first time since 2013, beat teenager Borna Coric 6-3, 6-2, 4-6, 6-4 in second night match on Arthur Ashe Stadium. “Very happy to be back,” Nadal said, “and to be through.”

“I think I played great. The first two sets I played a very high level of tennis. Seriously, then I get a little bit tired. I had some problems. I was sweating a lot. I lost little bit — you know, I don’t feel enough strong after that, no?

“I had little bit of stomach problem so I felt not perfect, physically perfect then.

“But then in the fourth I recovered little bit. I played again more aggressive. Finally was important victory for me. Happy the way that I played when I was, you know, physically good.”

Karen Pestaina for Tennis Panorama News at the US Open