You are here: Home / Approach Shots / Catching Up with Vania King 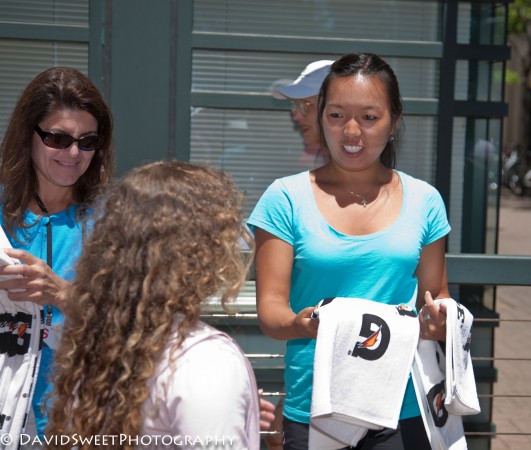 (September 1,  2015) FLUSHING MEADOWS, NY –  WTA player Vania King is back on tour after being absent for about almost a year. Playing under a protected ranking, we caught up with the Californian who is currently ranked at 414 in the world after her first round US Open loss to Roberta Vinci 6-4, 6-4, on Monday.

Tennis Panorama News: A tough match on the road back. You are under a protected ranking, am I correct?

Vania King: So I played three tournaments prior to this and yes I was out for almost a year. I didn’t touch a racquet for seven months. I had a herniated disc in my neck. I started having pain in May of last year. By US Open I had decided that I had needed some time to take off. I took off seven months, it got much better, so I was very happy with that. Started practicing and I really wanted to make the US Open. I felt that my tennis was good and I needed matches. Today I felt like it was a good match for me. I really see I need to get stronger. I was out for seven months and only practiced for three months. The first two I was so weak that I really couldn’t do what I wanted to do. Now I really can’t do what I really want to do in terms of fitness –wise, court-wise, because my body is not strong enough to do it. So slowly my goal is next year. I feel that my tennis is there.

I was up a break in both sets, I just need to get stronger.

TPN: Have you set your goal for next US Open in terms of your fitness?

VK: I haven’t set a specific date, but I really hope that I can be back next year, with or without any injury. Being strong and healthy. One year, I was gone for a year so I lost all of my rankings (points).

One year to get back into the the 100 may be a tough task for me but, I’m going to take it a step at a time and I feel that my tennis is good, so I’m happy about that. It just depends on how long this body takes to get strong again.

TPN: What keeps you motivated to keep playing? You are only 26, but it seems like you have been around for a long time.

VK: Tennis has changed a lot. When I came on tour it was fairly common for players to come up at 14, 15, 16… I was late actually at 16, 17 – that was late. But after me, no player that broke through was a teenager, very, very few players, but Americans overall.

I needed to stop for my physical health, but it was also very benfeficial for me to stop mentally, because I have never had a break.

As to your question, to stay motivated, to recognize that players, we do get burned out during the year because we do play a long season. If we play too many tournaments in a row, then we get burned out. With experience every play figures out what they can handle mentally. So for me it took me a few years to figure out how many tournaments can I play in a row. Which areas geiographically do I feel better in, in that way I adjust my schedule. And if I’m feeling bad, what do I do, should I push through it, should I take a break, go on holidays…

With experience, I learned to recognize the signs and for me it was always better to take a step back and not to push through it, take a few days off, take a week off… and then come back.

TPN: Are you playing doubles at all?

TPN: What’s been the highlight of your tennis career?

VK: Winning my first title in Bangkok. Winning the grand slams. Results-wise those are the best, but I think that if I could be happy consistently then I could I could be pleased. That was my goal to be happy for a long period of time. Recognizing metal dips and stuff and trying to maintain that.

VK: When I grew up I loved Pete Sampras, I played nothing like him because I’m tiny. Don’t have a big serve but I loved watching Pete. Watched all of his matches, tape them and watch them. I loved watching the rivalry between him and (Andre) Agassi, but I always rooted for him.

TPN: What do you think of when I say the name Serena Williams?

VK: I want her to win the Grand Slam. I think she can do it. I think she needs to stay focused. I think most of the tennis tour would be excited if she won it because it’s milestone for our generation. Of course Steffi (Graf) has done wonders for tennis, but we haven’t had someone from our generation to surpass the world records. She has won four in a row. Technically not the Grand Slam. I think she’s a great champion. I am so envious, I admire her so much for how strong she is mentally. Everyone’s got great tennis, of course she’s got great tennis but she is mentally the most stable and strong and that’s why she’s where she is.

TPN: Are you playing any tournaments the rest of the year?

Karen Pestaina for Tennis Panorama News at the US Open.