You are here: Home / Features / Mardy Fish Ends Pro Career with a Five-Set Loss at the US Open 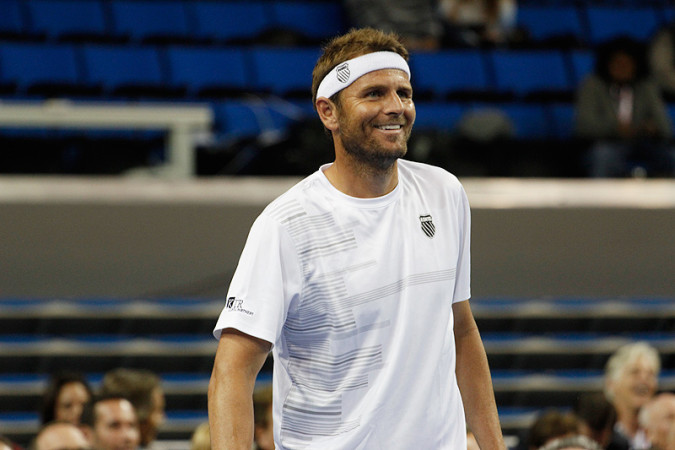 (September 2, 2015) FLUSHING MEADOWS, NY – Former Top 10 player Mardy Fish ended his singles tennis career on Wednesday in the second round of the US Open, falling to 18th seed a fellow 33-year-old Feliciano Lopez 2-6, 6-3, 1-6, 7-5, 6-3. Fish had a chance to serve out the match in the fourth set in a match which lasted 3 hours, 11 minutes. Fish began suffering from leg cramps in the fifth set.

“I was starting to sort of feel pretty tired and starting to get a couple of twinges in my legs at the end of the fourth set, so I figured that was my opportunity,” Fish said. “You know, didn’t pick a great time to play the worst game I played all day.
“You know, I haven’t been in that position in a long time, obviously. So things happen.”

Fish came back to the tour this year admitting that he’s been suffering from anxiety disorder. He wrote about it in the Players’ Tribune.

“I was lucky that I won the fourth set,” said Lopez on court “And then in the fifth set, he was not feeling well. He was cramping and he was so tired. I think he really deserved the win today.”

“It’s been many years together. We played many times. He beat me a couple times,” Lopez said. “I have to say, he was the better player, normally, when we played. And he was a great player, had a good career. It was very sad what was happening the last two, three years with this illness, and it’s great to have him back at least for a few weeks.”

“And then the health stuff, I mean, I’m just trying to help any way I can and share my story. Like I say, if it helps other people, that’s great.”

“I wanted this (US Open) to be — this one specifically to be the last one. I probably would have chosen this one as my last one regardless if I didn’t have any issues with my health in the past couple of years just because this is the biggest one and the most fun and the one that you want to go out on.

“I’m bummed that obviously my career didn’t end the past few years, you know, the way I had imagined. But it is what it is, and you try to make the best of your situation obviously.

“You know, it’s tough. I mean, it’s tough. It sort of, you know, starts kind of kicking in every once in a while in my head as I answer these questions that this is probably the last time I will do this.”

As to the future: “I’m going to try to help out with the USTA as much as I can, some of the younger Americans. I have a lot of experience over the last 15, 16 years. I have been playing tennis tournaments since I was six years old, so it’s a long 27 years of playing tournaments that matter, and now it’s over.”