You are here: Home / Features / Serena Williams Rebounds From Slow Start to Advance to Third Round of the US Open 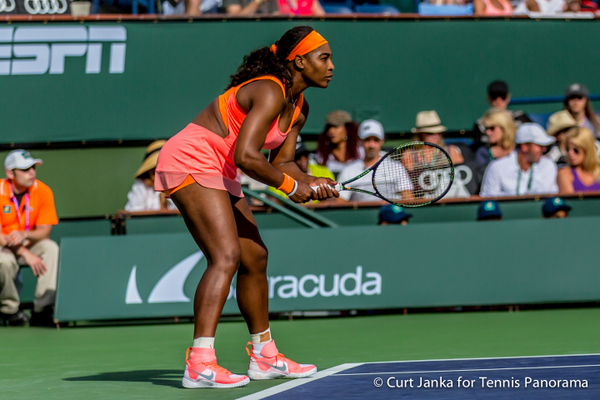 (September 2, 2015) FLUSHING MEADOWS, NY – Serena Williams escaped a 0-4 deficit in the first set tiebreak to win her second round match against Kiki Bertens 7-6(5), 6-3 at the US Open on Wednesday.

Williams stands five wins away from tennis history – winning the Grand Slam and her 22nd majors which would tie her with Steffi Graf for second on the all-time list.

Williams was far from her “A” game on Arthur Ashe Stadium, committing 34 unforced errors and hitting 10 double-faults.

“I felt a little tight today,” Williams said. “I think I’ll do things different, just things with myself, and I’ll be better for my next match.”

“I just got a little nervous today. But, you know, I’ve been doing totally fine. I’ve been completely relaxed, chill. I’ve been really, really fine.

“So I’m going to get back into the place that I was and I’ll be fine again.”

After the match Williams went with her coach to the practice court to work on serve.

“Patrick (Mouratoglou) told me some things that he saw that he thought I could work on to improve it and to get better,” she told media.

She will take on US countrywoman Bethanie Mattek-Sands in the third round. Sands dominated Coco Vandeweghe 6-2, 6-1. Mattek-Sands hit only 9 unforced errors to her opponents 25 and was 10 for 14 at the net.

“She’s playing great,” Mattek-Sands said of her next opponent. “I mean, right now she’s on a mission to get a record, and I’m here playing my game. I think it’s going to be a battle out there. I’m going to do my best.”

Mattek-Sands talked about her aggressive style of game:”That’s a game style that I’ve played with since I’ve been little. That’s how I’m going to go out there and play. Obviously Serena’s pretty aggressive. She’s going to rip some balls, hit some big serves. I think it’s going to be a good match.
“That’s obviously going to be the clash there. I’m excited for it”

“Sure,” Mattek answered about liking to be the spoiler. “That’s a fun role to play. Mess up the draw a little bit.

“No, you know what? I go into each match giving myself the best chance, I mean, knowing I can win any match I go into. Whether you’re going to get it done or not, your opponent has something to do with that, too. I’ll always feel confident in my game, confident in myself, and go out there and give my best.

“Every time I step on the court, that’s what I’ll give.”
“Right now I’m giving myself the best chance I can to play well. That’s all I can ask for.

Williams knows that it won’t be easy against her countrywoman.

“Knowing that she’s capable of having big wins kind of relaxes me because I know she’s going to come out and I know what to expect. She’s going to give 300%. She’s a huge fighter.

“She has a great game, by the way. I know that will help me, that I have to start out strong if I want to stay in the tournament. If not, I can go on vacation.”

“I love her personality,” Williams explained. “It really shows in her dresses and the clothes and the outfits. I love her spirit. She’s had a lot of ups and downs throughout her whole career.

“She’s just incredibly positive, you know. It’s so inspiring for someone like me. So I love that about her. And she has a really aggressive game. You know, I just don’t think there’s anyone on tour that says, I don’t like Bethanie Mattek. I don’t think that exists.”

“I definitely feel more determined to do better than what I did,” Williams said about Wednesday’s match. “I know I can play better, so…

“Yeah, it definitely wasn’t my happiest of moments. You know, I don’t think you should be happy with just winning. At least I’m not. Maybe other people can. Always looking to do better.

Serena’s 35-year-old sister Venus was extended to three sets by Irina Falconi 6-3, 6-7 (2), 6-2, Venus served for the match twice in the second set and Falconi made her way back to win the tiebreak.

“She really competed well,” Venus said of Falconi. “Played a great tiebreaker. I was really impressed with those dropshot returns off her serve. It was insane. Just great hands.

“Always definitely in a position to win the match, win the set, so that’s always a positive.”

Venus’ next opponent defeated her sister Serena in Montreal a few weeks ago. Belinda Bencic saved three match points and cried on a changeover before rallying to defeat Misaki Doi 5-7, 7-6 (3), 6-3.