You are here: Home / Features / In Her Own Words – Roberta Vinci 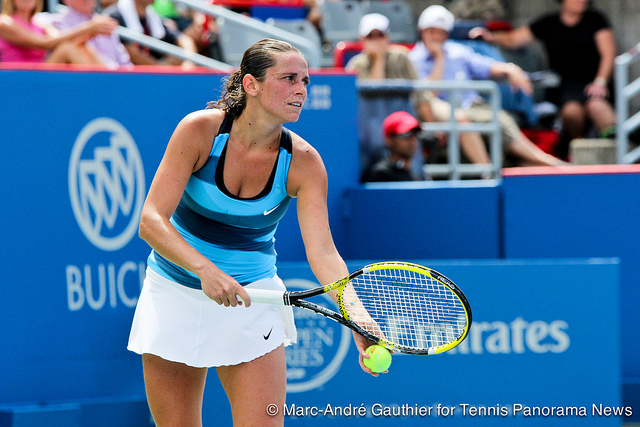 Q. You had a little bit of time to let it sink in. What are the emotions?
ROBERTA VINCI: I didn’t realize now yet, but it’s amazing. It’s like a dream.

I’m really happy, but of course I’m a little bit really sad for Serena because she’s incredible player, No. 1, almost career — all the Grand Slams.

But what I have to say? I’m happy. I don’t know. It’s tough to explain my emotion right now. Maybe tomorrow morning I can tell you something, but now it’s amazing. It’s magic moment for me. You work so hard for a long time, and it’s incredible. Tomorrow final.

Q. Was there any moment, as you served for the match, that you thought about the slam and Serena?
ROBERTA VINCI: Well, at the end, yes. At the end when I made a break, 4-3, and serve, I was a little bit scare. My arms was like (demonstrating shaking.) I’m not joking. And I said — on my mind I say that I’m 4-3 and serve in semifinal against Serena. So almost to the final US Open.

So, yes, sometimes. But in my mind, I say, Don’t think about this, because maybe you have more pressure. Stay calm, relax, and breathe during every single points. Don’t think that you have Serena on the other side of the court.

Try to enjoy. Enjoy. You are in semifinal in the big stadium with a lot of public, so try to take all the positive emotion of this game.

Q. How tight or nervous did you think she was?
ROBERTA VINCI: A lot.

Q. In the third set?
ROBERTA VINCI: I think a lot.

Q. A lot?
ROBERTA VINCI: Yeah. She broke one racquet at the end of the second set when I won the second set, and also she make two double faults in I think 3-All, Love-15. I don’t remember, but two.

And on my mind, I say, Think about this. She’s nervous. So try to keep it and fight every single point.

Q. When you were in your post game on the court and you were saying, Sorry, guys, the crowd really seemed to embrace you. They seemed to be having as much fun as you were. What were your thoughts then?
ROBERTA VINCI: Yeah, sorry. A lot of public for her, but it’s normal. Semifinal, almost to complete all Grand Slams. She deserved to win. She’s the No. 1.

So I was a little bit sorry for this because for me she cannot reach on the Grand Slam. So that’s it. That’s a lot of public for her. But the crowd was amazing, also.

Q. The other day you almost forecasted this and said, There might be two Italians in the final. Now it’s real.
ROBERTA VINCI: Yeah.

Q. Does it feel real yet?
ROBERTA VINCI: Yeah. (Smiling.) And tomorrow one Italian win for sure. (Laughter.) (Thumbs up.)

Q. I have one more question: today when you were playing you looked as if you were feeling that you knew no ball could ever get by you. You were willing to run after every ball. You were reading the ball before it was there. You had a real read on where her shots were going. You drove her nuts, really.
ROBERTA VINCI: Yeah, yeah, yeah. I play good today. (Laughter.) If you don’t play good you cannot win, against her especially.

So, yeah, tomorrow we will see. One Italian. It’s incredible moment, you know, but one Italian will win for sure.

Q. At what point in today’s match, when did you realize, Wait a minute, I can win this, I can beat her? When did you get that belief?
ROBERTA VINCI: Never. No, well, I say maybe 4-3-up, break, come on, come on, let’s do it.

And then I won. Well, I was 5-3 up, but I didn’t say on my mind, Okay, I won, because, okay, I lost this game and then I go to serve. She can break me, you know. She has a good return. She always push me a lot on the second serve.

Q. You had two half-volley dropshots, a forehand and a backhand.
ROBERTA VINCI: One I remember with two hands. A little bit lucky. (Laughter.) And the other one, I don’t remember. Ah, match point? Yes, yes, I’m a good doubles player, you know. (Laughter.)

Q. In the third set Serena was showing a lot of emotion, really trying to get the crowd into it, and you were even smiling a little bit. What are you thinking?
ROBERTA VINCI: No, I just thinking that she was nervous. She was nervous. She’s trying to fight or try to take some energy, positive energy from the crowd.

Q. Did Flavia’s win give you an extra push? Did you think about it before going on the court and during the match? Flavia vinto, so…
ROBERTA VINCI: Si, si, si. No, no, no. In Italiano?

I saw some games of Flavia but I didn’t think that, Oh, she won, so maybe — no, no, no, I just stay focus for my game and think about Serena and about Flavia or Simona.

Q. Take us back 15, 16 years ago. You’re just coming on this tour. Did you ever dream about these kind of matches?
ROBERTA VINCI: No. Maybe not 15 years old, no. It’s incredible. It’s incredible.

I’m 32, almost at the end of my career, and then I make the first US Open final in Grand Slam. I didn’t expect this.

Q. In the third set you kind of pointed to yourself to get the crowd involved.
ROBERTA VINCI: Yeah.

Q. Did that help you? Can you describe that moment?
ROBERTA VINCI: Yeah, because I won a great point and of course all the crowd was for her. And I say, Come on. One time for me. (Laughter.) That’s it.

Q. Doubles, Grand Slam in Australia, wondering if that experience helped you today.
ROBERTA VINCI: No, maybe not today, no. No, today — yeah, I won a lot of doubles, okay, Grand Slam, but today I played my game. On my mind I said, I have nothing to lose. Enjoy your game. You play against Serena.

No, but about the doubles, can’t ask me today. No.

Q. So you said you’re 32 years old. Very, very old woman. (Laughter.) You’re unseeded, and yet you did what no one’s been able to do in something over 30 matches against the mighty Serena. Talk about how it is.
ROBERTA VINCI: Well, I feel good right now. I can maybe touch the sky with my finger. (Pointing to the sky.)

It’s tough to explain, because I don’t have many — maybe also in Italian the words that can I explain really, because it’s amazing.

Maybe if yesterday told me, Okay, tomorrow you can win against Serena, I say, Come on. Yesterday I called my travel agency to say, Okay, book me a flight, because you know… (Laughter.)

And then now I have my final tomorrow. So it’s incredible, yeah.

Q. So you had a flight booked to go home?
ROBERTA VINCI: No, no, no, tomorrow. Because I played on second I don’t want to do quick. So, okay, I lost today against Serena and tomorrow I will go home.

Q. What time was your flight scheduled for tomorrow?
ROBERTA VINCI: Um, 10:00 in the night. So maybe I can… (Laughter.) Maybe I can, eh?

Q. Talking a little tennis now, you were winning so many points at the net. You’re a great volleyer, doubles. Was there ever a time you thought, I’m going to serve and go in, but you didn’t?
ROBERTA VINCI: Yeah, sometimes I tried to do the serve and volley, but she was always — she was always aggressive. My serve today was a little bit up and down, not so good sometimes.

Especially on the second serve. On my second serve, I had a lot of problem, because I saw her really…

Q. On top of you?
ROBERTA VINCI: Yeah, at the net, really.

So I said, Okay, if I don’t make a good second serve, she always push me a lot. So was tough.

But sometimes I change. Not always kick, but sometimes some slice on her forehand. Was not easy.

Q. Next time you see Serena what will you say to her?
ROBERTA VINCI: No. I go like this. (Hiding face with hand.) No, no, I’m joking. What I have to say? She’s the No. 1. Doesn’t matter if she lost me, if she lost to me today. For me, she’s the very best right now. She’s an incredible player. She won a lot of tournaments, Grand Slam. For me, yeah, she’s the No. 1.

Q. You touched upon a couple of times the fact that an Italian will certainly win tomorrow. I’d like you to elaborate on what it means to be playing in the final with Flavia.
ROBERTA VINCI: What does it mean to play? Yeah, will be a tough match for both tomorrow. I think a lot of pressure. But we know each other for a long time.

I played against her three or four years ago and I lost on the center court. I remember that I was completely scared, like a little bit blocked. I didn’t play. I didn’t play in that case.

So I hope that tomorrow — of course I will do my best. But I will like to play. To play, enjoy, enjoy and to play my game, and not so stressed or tight. Because it’s a finals. It’s normal. Come on. Enjoy. That’s it.

Q. What’s the biggest upset you remember in women’s tennis? How do you compare your third set?
ROBERTA VINCI: The best?

Q. The biggest upset.
ROBERTA VINCI: Che cosa? Me? Mine?

Q. Did Serena say anything to you at the net?
ROBERTA VINCI: Sorry?

Q. Thinking back on your career, is there anyone that you would want to dedicate this to that really helped you to get to this moment?
ROBERTA VINCI: Well, of course all my family, all the person that work with me for long time: my coach, my physio, everything, all my team. That’s it.

Q. You called it the best moment of your life on your on-court interview.
ROBERTA VINCI: No, is true, is true.

Q. It truly is the best moment of your life what occurred today?
ROBERTA VINCI: Yeah.

Q. Considering that the US Open has Italian an coffee sponsor, have you had any of the coffee this year?
ROBERTA VINCI: No, no. I don’t understand. Sorry.

Q. The US Open has an Italian coffee sponsor.
ROBERTA VINCI: Lavazza? Coffee. I like so much coffee. (Laughter.) Really.

Q. Have you had any this year?
ROBERTA VINCI: Yes, in the restaurant. Yes. After. But I like macchiato. You know, a little bit of milk. Much better.

Note from the US Open Media Operations Guide as to why Tennis Panorama News is allowed to post transcripts: