You are here: Home / Features / No. 1 Novak Djokovic and No. 2 Roger Federer to Meet in US Open Final 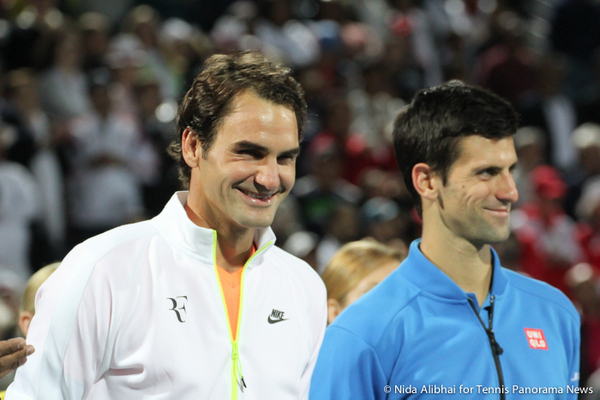 (September 11, 2015) It will be No. 1 Novak Djokovic versus No. 2 Roger Federer for the 2015 US Open title on Sunday afternoon in Flushing Meadows. Both men had straight set victories over opponents on Friday night.

Djokovic moved into his sixth US Open final with a 6-0, 6-1, 6-2 win over last year’s champion, Croatia’s Marin Cilic in 85 minutes. Djokovic was the champion in 2011. The match was most the lopsided US Open semifinal in the Open Era. Cilic has been dealing with a right ankle/foot injury since his quarterfinal match with Jo-Wilfried Tsonga.

“I’m not 100%, obviously,” Cilic said.” And even the last match against Jo I wasn’t feeling 100%. You know, the foot was causing me obviously some trouble with the movement, but, you know, Novak was able to expose me much more today.

“Even coming before the match and thinking, you know, if I’m going to play or not, I decide to play, as it’s a Grand Slam tournament, it’s deep in the tournament. You know, I decide to go on the court and give my best.

“You know, if it would be some other tournament, doesn’t matter which one, I would probably pull out and not, you know, get myself in the position to aggravate it much more.”

“It felt great to be able to perform as well as I did today at this stage of a tournament, again, knowing that Marin carried that injury for last couple of matches,” Djokovic said in press. “I didn’t allow that fact to distract me too much.

“I just wanted to concentrate on what I needed to do on the court and come out with the right intensity, make him move, get as many, you know, returns back in play.

“All in all, it was from my side a very solid match, and I take that as a confidence booster for the final.”

The Serb extended his perfect record against Cilic to 14-0.

Thirty-four-year-old Roger Federer won the battle of Swtizerland, taking down his Olympic doubles and Davis Cup teammate and friend No. 5 Stan Wawrinka 6-4, 6-3, 6-1 to reach his first US Open final since 2009, when he lost to Juan Martin del Potro.

“Tried very hard in the last six years to get back in another final,” Federer said in an on-court interview. “Came close a few times.”

Asked about the quality of his play over the fortnight, he said: “It’s definitely very good, maybe my best, I’m not sure. I’m serving very well. I’m playing positive tennis. I’m going for my shots, and it seems to work. I’d love it to work just one more time.”

“For sure it doesn’t help when you play Roger and he’s trying to play really aggressive, really fast,” Wawrinka said in his post-match interview. “When he get the lead, when he get the break, then he’s relaxed. The way he’s playing he’s reading better, moving better, so everything going faster, that’s for sure.

“I tried everything with what I had today, for sure. I wasn’t serving well at all. That doesn’t help because I don’t get free point. I cannot really start the point from the baseline being aggressive.

“Yeah, was tough. Didn’t get my — I would say my heavy ball from baseline was tough to put some topspin. Was flying a little bit more than what I expect, but he was simply too good.”

“I didn’t play really my best tennis,” said the No. 5 player in the world. “I didn’t play the way I wanted all the tournament, but I still in semifinals.

“So if I look my result in Grand Slam this year I couldn’t ask for more. Make two semifinal, one quarterfinal, and one time winner. It’s something amazing for me.”

This will be Federer’s seventh trip to the US Open final, he won five straight titles from 2004-2008.

“I’ll get ready for either crowd, you know, I must say, because there is never a guarantee who the crowd are going to cheering for, Federer said. “I hope the crowd’s going to be happy to see me in the finals as well again after, what’s it been now, six years I haven’t been in the finals. Sounds like a big deal. Not that long ago, my opinion.

“I still remember the six finals I played ’04 to ’09. I had many great ones, one very tough one against Agassi where the crowd was totally lopsided on his side.

“I think it’s important to prepare for both. I definitely think if there would be more on my side that will give me a lift and extra energy and momentum possibly.

“That could swing the match a little bit. But other than that, you know, obviously Novak is a great player. Both of us have played in all tough conditions, and you’ve got to play well to beat him. There is no question about that.”

This will be the 42nd overall meeting between Federer and Djokovic, sixth this year. The Swiss leads 21-20 with his last victory coming in the Cincinnati Masters final. Djokovic has beaten Federer three times, including the Wimbledon final.

Djokovic has been in all four major finals this year, winning the Australian Open and Wimbledon titles and losing the French Open.

On reaching all four Grand Slam finals, Djokovic said: “It definitely is an achievement. I don’t want to even think about the opposite to that, you know, that I’m not happy with four finals. Win or lose on Sunday, it still has been so far a great year, best year alongside of 2011.

“But, you know, obviously I’m only thinking about winning and winning that US Open trophy. It’s why I’m here, and I will try to make it.”

“If I have to play Roger (Federer), obviously we all know how consistent he is and how good he is in the latter stages of a Grand Slams and any other big tournament,” said the world No. 1. “He’s always going to perform on a high level. Rarely he drops his level. He always makes you play your best.

“I know that he’s also lately being very aggressive coming to the net, mixing up, and trying to shorten out the points. I think also he improved his speed. His defensive game is better than it was. Maybe healthier. Everybody is working hard to improve their game and give themselves highest level possible.

“So in order to win a Grand Slam title I have to be on top of my game, as well. So knowing that, coming to the court, of course it’s going to be incentive to try hard.”

“What I like about the rivalry, ” Federer said, “I don’t know how it is for him, but I feel like he doesn’t need to adjust his game as much, either. I think it’s just a straight shootout, and I think that’s the cool thing about our rivalry. It’s very athletic.

“We both can handle each other’s — whatever we present to one another, and I think our matches, it’s very even. That’s it, I think. I don’t need to add more here.”