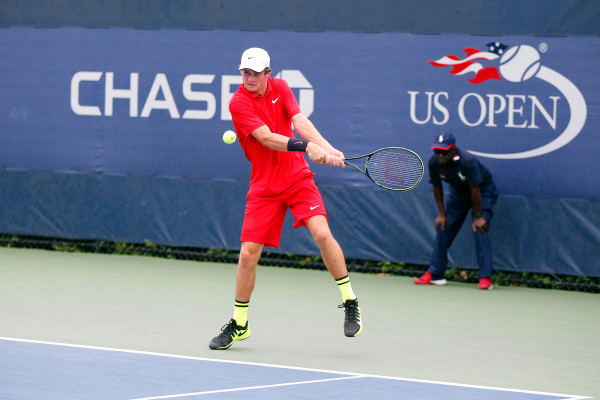 (September 12, 2015) FLUSHING, N.Y. – Two American boys will battle it out for a junior Grand Slam singles title for the second time this year at a major, and once again it’s Taylor Fritz and Tommy Paul left standing.

The pair each won their respective semifinals on Saturday at the U.S. Open Junior Championships and will square off in Sunday’s final for a rematch of the French Open final the Lumberton, N.J., resident Paul won back in June.

Paul, an 18-year-old who is the No. 5 seed, dusted aside Australian qualifier Alex De Minaur with dropping a game, 6-0, 6-0, in his semifinal match played at the USTA Billie Jean King Tennis Center.

“I think with Taylor it’s just about his power; he hits the ball so much harder than most people in the juniors,” said Paul, who was told once of Fritz’s serves was clocked at 138 miles per hour on Saturday. “You just have to be able to absorb that and play my game.”

Paul said he can only remember one other time during his junior career when he won without giving up a game. “It was my first match of 2015 in qualifying for a Futures event,” said Paul, who turned pro after he won the French Open instead of playing collegiately for the University of Georgia. “My coach once bet me I’d never do it because he joked I couldn’t focus long enough to win 0-0.

“I don’t think it was his best day,” Paul added. “I had an on day and didn’t miss too many balls. I’m not feeling bad for him because I want to win. It’s definitely tough to win 0-0.”

FRITZ MOVES ON TO FINAL

The top-seeded Fritz beat No. 11-seeded Yunseong Chung of Korea on Saturday in his semifinal match, 6-2, 6-3.

“It’s been a really good year,” said Fritz, who besides the final in Paris also made the semifinals at Wimbledon and the quarterfinals at the Australian Open. “I’d love to get the win. This is a better surface for me than the French Open (hard instead of red clay). Clay is my worst surface.”

Fritz said it is tougher to be the top seed. “There’s a target on your back and they have nothing to lose,” he said of his opponents. “They are going to play their best tennis against you. And you have to be focused and ready for that. They can come out dangerous.”

Fritz said he and Paul spoke before they played. “We both said let’s go out and get it done,” Fritz said. “We both wanted to play each other in the final. Wouldn’t want it any other way than two Americans in the final. We’ve been good friends for a long time.”

Paul has beaten Fritz the past two times they have played, but both on red clay and in three sets. Besides the French Open, Paul downed Fritz at a Futures event in Spain.

The last time two American boys’ played each other in the U.S. Open Junior final was in 2010 when Jack Sock beat Denis Kudla. It also happened in 2000 when Andy Roddick beat Robby Ginepri. 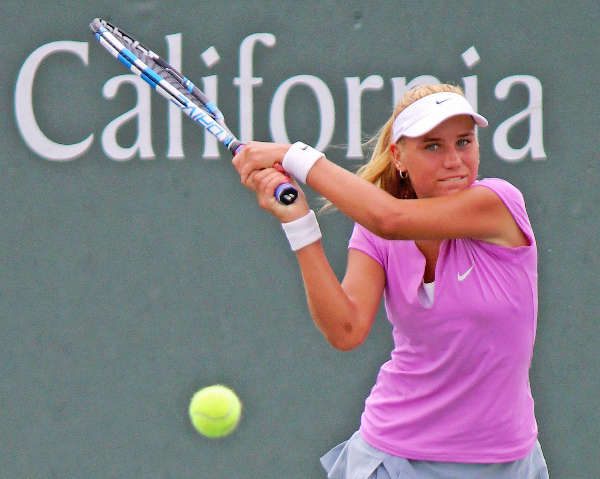 The 16-year-old and No. 9-seeded Kenin beat No. 11-seeded Fanny Stollar of Hungary, 6-4, 7-5, to advance to the final at the USTA Billie Jean King National Tennis Center. Kenin will face another Hungarian player on Sunday in the final as she squares off against No. 2-seed Dalma Galfi, who will become the world’s No. 1-ranked ITF junior when the new rankings are out on Monday.

In the other girls’ semifinal, Ohio State women’s player

“It was very tough,” Kenin said. “She is a really good player, and I knew I had to play really good to beat her.”

Kenin overcame two set points in the second set to preserve the win. Kenin became the third Florida girl in the last four years to make the U.S. Open junior final. Winner Samantha Crawford (2012 and finalist Tornado Black (2013) were the others.

“It’s been really good, I have so much confidence and I’m playing better and better in each match,” said Kenin, the USTA National Hardcourt champions. “So I’m hoping to do the same tomorrow to take the title.”