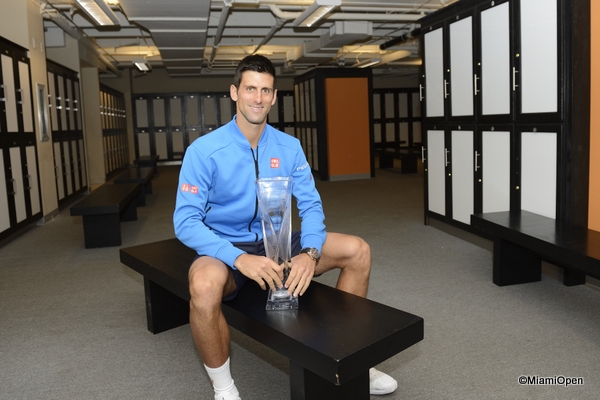 (September 14, 2015) LONDON — Novak Djokovic has clinched the year-end No. 1 Emirates ATP Ranking for a fourth time after he captured the US Open title — which represents his 10th Grand Slam championship — on Sunday. In another stellar season, the Serbian has captured seven titles, including three Grand Slams and four ATP World Tour Masters 1000s, from 11 tour-level finals.

“It’s a fantastic feeling to know I will end the year at No. 1 again,” said Djokovic. “This is what we fight for since January 1st. We still have a few tournaments left though and I look forward to competing in Beijing, Shanghai, Paris and London.”

Chris Kermode, the ATP Executive Chairman and President, said, “Congratulations to Novak on yet another incredible achievement. To secure the year-end ATP World Tour No. 1 ranking this early in the season just goes to show what an amazing year he has had. His remarkable level of consistency throughout the season and on the biggest stages has been quite simply awe-inspiring. He’s in his prime, unquestionably at the pinnacle of the game, and fully deserving of this latest accolade – a true credit to our sport.”

In 2015, Djokovic has become only the third player in the Open Era (since 1968) to reach all four Grand Slam finals in the same season, after Rod Laver (1969) and Federer (2006-07, ’09). He won the Australian Open (d. Murray), Wimbledon and US Open (d. Federer both times), but narrowly failed in becoming the eighth player in tennis history to complete a career Grand Slam after a runner-up finish at Roland Garros (l. to Wawrinka) in June.

Overall, he has a 21-4 record against Top 10 opponents this year and has won seven titles, including ATP World Tour Masters 1000 events at the BNP Paribas Open in Indian Wells (d. Federer), Miami Open presented by Itau (d. Murray), Monte-Carlo Rolex Masters (d. Berdych) and Internazionali BNL d’Italia in Rome (d. Federer). He also finished runner-up at the Dubai Duty Free Tennis Championships (l. to Federer), Rogers Cup in Montreal (l. to Murray) and the Western & Southern Open in Cincinnati (l. to Federer). He currently has a 63-5 match record in 2015.

Later this year, Djokovic will attempt to secure a fourth consecutive Barclays ATP World Tour Finals title (and fifth crown overall, following his first win in 2008) at The O2 in London from 15-22 November. Djokovic will be making his ninth straight appearance at the prestigious indoor event, where he will be officially presented the year-end ATP World Tour No. 1 Trophy in an on-court ceremony.

Djokovic first ascended to No. 1 in the Emirates ATP Rankings on 4 July 2011, following his maiden Wimbledon triumph, and held the top spot for 53 weeks. He reclaimed No. 1 from Federer on 5 November 2012, before relinquishing it to Nadal on 7 October 2013. Djokovic once again returned to No. 1 on 7 July last year, when he went on to become only the fourth player — after Lendl, Federer and Nadal (twice) — to hold, lose and regain the year-end No. 1 in the Emirates ATP Rankings.