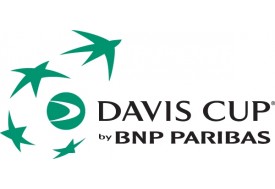 From the ITF: (September 23, 2014) The International Tennis Federation has announced the Draw for the 2016 Davis Cup by BNP Paribas, which took place on Wednesday evening at the ITF AGM in Santiago, Chile.

The 2016 World Group dates are as follows:

[*] = Choice of ground decided by lot

The home nation is listed first for each tie.