You are here: Home / Features / Wuhan Open – Sharapova Retires From Match with Arm Injury; Bouchard Pulls Out of Tournament 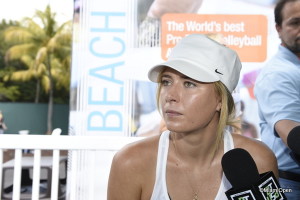 (September 28, 2015) Maria Sharapova’s comeback after being off the tour since Wimbledon, was derailed when the Russian retired with an arm injury in the third set of her first match at the Wuhan Open. The world No. 3 had not played for three months due to a leg injury.

“I’ve had my share of serious injuries, and I know this is far from it, something I just have to take care of,” she said.

“I was really happy to be back on the court,” said Sharapova. “I’ve gone through the injury and not playing and missing a Grand Slam, going through the rehab, going through training, this is really the moment that you work for. I enjoyed that feeling again.

“That’s why it’s unfortunate to have to stop from that because you always build and you get the rust out and you hope you grow as the tournament goes along, but not in my case this tournament. Of course, it’s not the best way to end for my fans.  But I know that this tournament is here for many years and I will still have the opportunity to come back.”

Canadian Eugenie Bouchard withdrew from the tournament due to the concussion she suffered during the U.S. Open.

In other injury-related news – No. 28 Sabine Lisicki will be taking the rest of the year off to heal her knee.

The German said on social media: “unfortunately my knee is not ready and I will not compete at tournaments this season.”