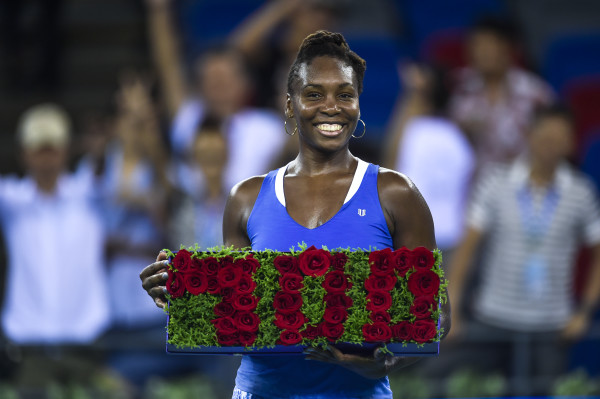 (September 29, 2015) Venus Williams reached another milestone on Tuesday at the Wuhan Open. She won her 700th career WTA Tour match with a 6-4, 6-3 second round victory defeating Germany’s Julia Goerges.

Williams received roses shaped into the number 700 from tournament directors Yi Guoqing and Fabrice Chouquet. She confessed that she was not aware of the upcoming milestone. “I didn’t know.  I’m glad nobody told me before.  I would have been a little bit nervous,” said the 35-year-old American. “Who doesn’t like winning?  You know, that never gets old.”

“I was thinking, ‘How long would it take me to get to 800 now?’ Maybe that was my first thought!

Venus’ sister, world No. 1 Serena praised her sister on Twitter:

The seven-time major champion won her last Grand Slam event at Wimbledon in 2008. She is the WTA ninth player in the Open Era to reach 700 match wins.