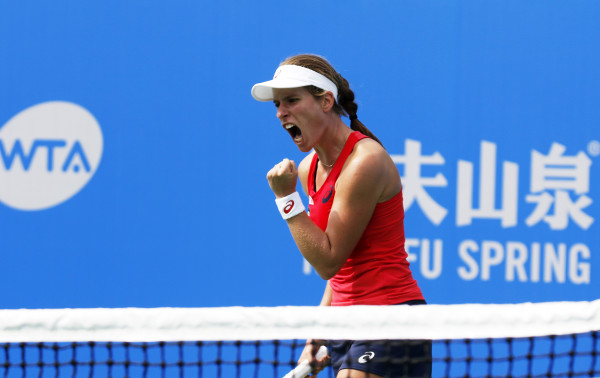 Konta came from 1-5 down in the third set to tee up a quarter-final on Thursday against Venus Williams and said afterwards that playing the American would be “kind of a childhood dream”.

“She (Halep) is No. 2 for a reason, and that is an incredibly humbling experience for me, that I can compete with such a player,” said 24-year-old Konta. “But in terms of the result, I’m just really happy I get to come back tomorrow and play against someone like Venus. It’s actually a bit of childhood dream I guess. I grew up watching Venus.  So as a child, I’m like, Wow.  But as a competitor now, I’m just looking forward to the challenge.”

Williams was too strong for Carla Suarez-Navarro in their third round encounter. “We’ve had some great matches, and when I play her I always have to stay concentrated because she’s a great competitor who’s always played well against me,” said Williams. “It’s not just her single handed backhand, she just hits it so well. I was lucky because she missed a few today and gave me some openings.”

Roberta Vinci is keep up her form which saw her reach the US Open final earlier this month. She knocked out Wuhan’s defending champion Petra Kvitova with a 76(3) 62 and takes on Karolina Pliskova in Thursday’s quarter-finals.

Wimbledon finalist Garbine Muguruza earned her quarter-final spot with a 46 61 60 comeback win against Ana Ivanovic and can now look forward to a last eight meeting with Anna Schmeidlova of Slovakia on Thursday.

Angelique Kerber wasted no time in dispatching Camila Giorgi and will be up against Coco Vandeweghe in the quarter-finals.