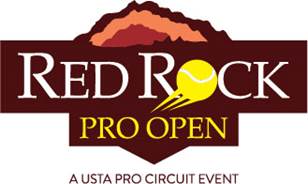 (September 30, 2015) Summerlin, Nev. – One year ago, Jovana Jaksic arrived in Las Vegas for the first time, celebrated her 21st birthday and made her debut at the  Red Rock Pro Open.

Jaksic enjoyed it so much, the Serbian native has never left, choosing to live in Las Vegas and train full-time at the Red Rock Country Club in Summerlin, about a 20-minute drive northwest of the Las Vegas Strip.

“This really is my hometown tournament now,” said Jaksic, who celebrated her 22nd birthday on Wednesday by saving a match point and coming back to beat her doubles partner Taylor Townsend, 3-6, 7-6 (3), 6-4, in the first round of the USTA women’s $50,000 Pro Circuit event. “There were so many friends and family watching me. It was the reason I was able to pull it out today.”

Jaksic was serving down match point at 4-5, 30-40 in the second set but kept her cool. “If I think that’s it’s a match point I would lose it for sure,” said Jaksic, adding that she’s never lost a match on her birthday. “I’m just thinking where I’m going to serve it and focusing on my preparation and thinking about each point by point.”

Jaksic said she didn’t even think about the match point during the third set. “I went to shake my coach’s hand after the match and that’s when I realized I saved a match point,” she said.

Jaksic met tournament founder and local attorney Jordan Butler at last year’s tournament, and six weeks later signed with Butler for player representation. “I’m also here because of my agent,” said Jaksic, who is being coached by Sam Querrey’s coach and former UNLV standout Henner Nehles, and is being trained by local fitness coach Korey Goodwin.

“I was thinking about training somewhere in the States during the preseason to get ready for Australia. This is one of the most beautiful clubs in the world. When I first got here I fell in love with this place.”

Jaksic will play former Las Vegas champion Romina Oprandi, the No. 3 seed on Thursday in the Round of 16. The two have never faced each other.

The player Oprandi beat in the 2011 final, No. 5 Alexa Glatch, moved on with a 6-3, 6-3 victory over qualifier Robin Anderson. Glatch opens play Thursday on Stadium Court at 9:30 against Croatia’s Ana Vrljic, which will be followed by the Jaksic-Oprandi match. No. 4 seeded Sachia Vickery and No. 6 Nicole Gibbs also won first-round matches.

In the third match on Stadium Court, Vickery will lock horns with Michaella Krajicek of the Netherlands, who continued her winning ways just days after triumphing with the $75,000 Albuquerque, N.M., Pro Circuit title.