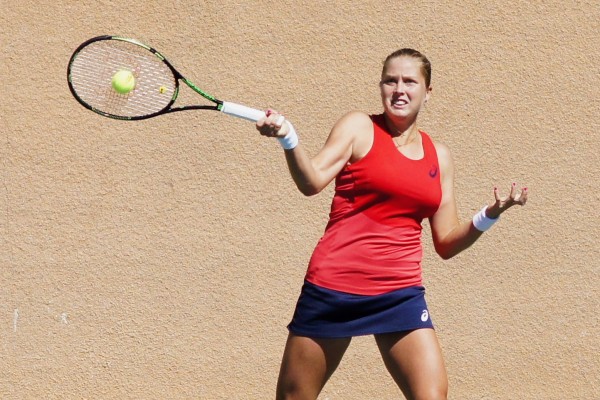 (October 2, 2015) Summerlin, Nevada – A decision to remain in Los Angeles and work on her game instead of adjusting to the altitude of Albuquerque a week before playing in Las Vegas appears to be paying off for Shelby Rogers.

The 22-year-old Rogers, seeded seventh, advanced to the semifinals of the Red Rock Pro Open being played at the Red Rock Country Club with a 6-4, 6-3 win over No. 2-seeded Anna Tatishvili on Friday.

Rogers, originally from South Carolina, has been working full-time with her coach Marc Lucero, who is based in Southern California. The pair have been training together in Carson, Calif., since December.

“I’ve always loved playing in altitude,” said Rogers, who told Las Vegas Review-Journal reporter Steve Carp before the tournament that she wasn’t sure the decision to rest up and train instead of playing Albuquerque would pay off or not. “It was a little bit cooler out there so the balls flew a little bit more, for both of us.”

Rogers had beaten Tatishvili in the only other time they have faced each other, back in 2013 in the final of the $75,000 Albuquerque tournament.

Currently ranked No. 157 in the WTA world rankings, Rogers said she is fully recovered from a partially torn medial collateral ligament suffered right before Wimbledon.

Rogers will play 2011 Las Vegas winner Romina Oprandi in the semifinals in the first match on at 11 a.m. Saturday morning. It was in 2011 that Oprandi beat Rogers in the quarterfinals at the Troy, Ala., $50,000 Pro Circuit Challenger, the only time in the career they’ve faced each other.

Rogers is coming off a great U.S. Open where she won three matches in qualifying and then two main-draw matches before falling to No. 2-seeded Simona Halep in the third round in a match played in Arthur Ashe Stadium at the USTA Billie Jean King National Tennis Center.

Rogers told the international media in New York that her third-round appearance was, “why we play the sport. That’s why we try to win each match, to get to the further rounds and play the bigger players.”

Rogers recalled playing the Party Rock Open final in 2012 in front of music sensation Red Foo when she fell in the final to Lauren Davis. “I love playing here and have a lot of great memories from here,” she said.

In the other semifinal, former two-time NCAA singles champion Nicole Gibbs will face Michaella Krajicek. Both won straight-set matches on Friday in the quarterfinals.

Gibbs was also busy in the doubles semifinals later in the day as she and partner Julia Bosserup took advantage of their USTA wild card to reach the Sunday doubles final with a 6-3, 6-0 win over Antonia Lottner of Germany and Pemra Ozgen of Turkey, the No. 3 seeds.