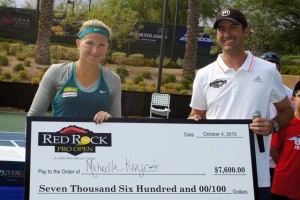 (October 4, 2015) Summerlin, Nevada – Michaella Krajicek overcame two rain delays and windy conditions to win her 13th consecutive match over the past 15 days as she captured the Red Rock Pro Open on Sunday with a straight-set win over American Shelby Rogers.

Krajicek received the $7,600 cardboard check, plus the real paper one that is cashable at any Las Vegas bank for her 6-3, 6-1 win at the USTA Pro Circuit $50,000 tournament played for the seventh straight year just 20 miles from the famous Strip at the Red Rock Country Club.

You wouldn’t fault Krajicek for sleeping in on Monday morning as she rests before traveling back to her home in Bradenton, Fla., to continue training for two more $50,000 events in Canada in two weeks.

“It was not easy playing today and I think that is why we both made so many errors,” said Krajicek, who is traveling with her coach and new husband Martin Emmrich.

Rogers said the fact that the first match on, the doubles final, was delayed twice and started 45 minutes later than scheduled didn’t hurt either player. She said her ineffectiveness had more to do with Krajicek’s powerful serve.

“The fact that I hit hard and serve big are my strengths because I don’t move as well as some of the other girls,” Krajicek said. “My serve is definitely one of the strengths of my game. It’s not that I don’t move well. I would just say it’s not in the top three of things I do best.”

“I hoped to do a lot of things better today,” Rogers said after the match. “Sometimes you have bad days and she played better. The wind caused my timing to be off. It just wasn’t my day.”

The veteran 26-year-old Krajicek was asked after the match if she’s been given new life in tennis following four knee surgeries, the last coming in 2012. “I definitely feel good after these two tournaments,” she said. “I still feel like I have a lot left in me. I’m honestly happy it’s going this good so I can continue to go in the direction I want to do to be a successful pro.”

The top-seeded doubles team of Paula Cristina Goncalves and Sanaz Marad were hoping to duplicate the same feat as Krajicek by winning Pro Circuit events on back to back weeks. But it wasn’t meant to be for last week’s Albuquerque winning team as the wild card team of Julia Boserup and Nicole Gibbs captured their first title playing together with a 6-3, 6-4 win in the doubles final.