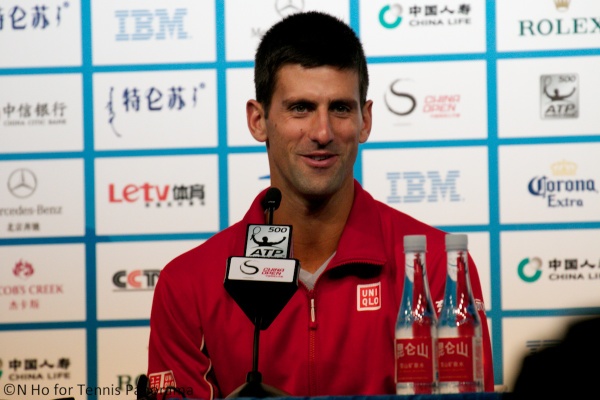 “The scoreline, especially in the first set, doesn’t indicate the real battle that we had on the court,” Djokovic said.

“Had a couple of opportunities, especially on the 3‑2 game, Love‑30, 15‑40. Missed the volley. It was a bit unfortunate with some shots at that stage of the match.

“But, again, I managed to stay calm and still stick with the game plan to be aggressive and to make him move. It worked very well.”

“Obviously the dynamic of him is different than my one. Especially in a very positive place for him, place where he won already six times, five times before that final. It’s obvious that is perfect place for him.

“I was competing very well in the first set. So seriously I am happy the way I played. I am happy the way that I am improving. As I said, when I arrived here, every match is important for me. All improvements are important, even if are the small ones. I felt during this week I improved a lot of things. I take a lot of positive things from the week. That’s very important for me, no?”

“I thought he did well from the backhand side,” the Serb continued. “He was more aggressive. I was looking for my kind of room for maneuver on his forehand side. He usually opens up that side. I tried to make the angles with the backhand cross.

“But I did well. I think I maintained that level of aggressivity and strength and power in my shots, and eventually I knew that he’s going to make mistakes and he’s going to give me shorter balls so I can dominate the rallies, which happened.

“I think the serve helped me a lot tonight, over 80% of first serves in, the aces, finishing off with an ace. That’s an element in my game that has worked very well throughout the entire week that has helped me to win many free points, obviously.”

Nadal still leads in the overall head-to-head against Djokoivic at 23-22. However, Nadal has lost 15 of his past 22 matches against Djokovic.

Djokovic will be the top seed for the Shanghai Masters this week. “Next week’s tournament is going to be even stronger because obviously all the best players in the world are there,” Djokovic said.

“This positive week definitely encourages me and gives me a lot of confidence for Shanghai.”

Djokovic, who has won three out of the four majors this year, has a 68-5 record this season.